We know a lot about Brad Pitt, especially as an actor and about his personal life in which he was for a long time with another Hollywood star like Angelina Jolie. However, few people know that the billionaire actor is a great motorcycle lover.

On more than one occasion he has been seen with someone taking a walk through Los Angeles. And it is not surprising considering that it is the owner of a large collection of motorcycles, among which the one that we bring you today stands out. It’s about the Street Tracker Scotland, an exclusive vehicle customized by the prestigious Roland Sands, which costs a whopping $ 300,000 (about 254,000 euros to change).

In Brad Pitt’s new commercial, the protagonist has gone from being a coffee machine to a motorcycle. And it is that the American actor has used for his commercial one of the jewels that he treasures among his motorcycle collection. It’s about the Street Tracker Scotland, an exclusive motorcycle created by Roland Sands, in which materials such as titanium or carbon fiber are mixed in its construction.

Perhaps that is what has led it to be considered one of the most expensive motorcycles in the world. In fact, when Brad Pitt acquired it in 2012 he had to fork out $ 300,000 (254,000 euros). An amount that is justified by the exclusivity of the model (only a dozen of them were made), the materials of its construction and the reputation of the specialist who prepared it. 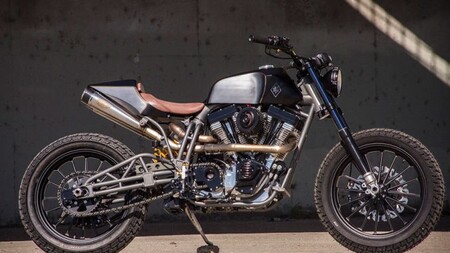 However, this motorcycle keeps more secrets, and it is actually based on a motorcycle produced in 2009 belonging to a North American group known as MotoWorks. This company created at the time a kind of multivitamin Ducati Monster with materials as crazy and as expensive as titanium (with the difficulty of working with that material) or carbon fiber.

To get around, this incredible bike uses a huge V-twin engine of almost 250 HP of Harley Davidson origin to which a rotated clutch system is attached to achieve greater ground clearance. As you can see, everything was designed for your enjoyment. However between 2018 and 2019, Brad Pitt looked for some comfort and turned it into a Flat Track. 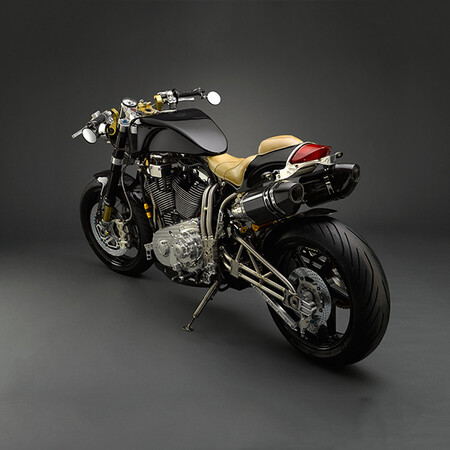 For this he turned to the specialist Roland Sands who completely transformed it into what we now see. To do so, he replaced his body with a new aluminum one, the front suspension changed to a more conventional one. marca Öhlins and created a new braking for the front end with a single lobed disc with four-piston axial caliper and brand-name radial pump.

Its headlights, handlebars, seat and wheels are also replaced in after comfort and the possible daily use that with the old design could not be carried out. After these changes, the recipe has been so explosive and unique that we drool to admire it.

If you want to hear how this beautiful motorcycle sounds, here is the video. We do not know if with this campaign Brad Pitt will sell many coffee machines but what we are sure is that motorcycle lovers have won us over with his good taste when preparing a motorcycle.

In Motorpasión Moto | We tested the BMW C 400 GT: a premium scooter for the A2 license that improves engine and still lacks cargo space | The feat of the Van Buren sisters: a 9,000 km motorcycle trip for equality and feminism in 1916

Many Thanks To The following Website For This Valuable Content.
Brad Pitt boasts of riding the world’s most expensive motorcycle in his new De’Longhi ad