Are You Lonesome Tonight? (China)

To you. Wen Shipei
Wen’s debut feature, starring Eddie Peng and Sylvia Chang, is a thriller revolving around the death of a man knocked over by a car, whose body is mysteriously riddled with bullets. Previously known as Tropical Memories, the project received the VFF Talent Highlight prize at the Berlinale co-production market in 2018. The film is produced by Ning Hao’s Beijing-based Dirty Monkey Studios, and was released in China on June 12. Wen studied at New York’s Columbia University and his short film The Carpenter went to Palm Springs International Film Festival in 2016.
Contact: Antoine Guilhem, Wild Bunch International

Dir. Sergei Loznitsa
Having previously competed at Cannes with features including My Joy (2010), In The Fog (2012) and A Gentle Creature (2017), and receiving the Un Certain Regard directing prize for Donbass in 2018, Loznitsa returns with a special screening of his latest work. Told entirely with archive footage, the film explores the events leading up to the massacre of more than 33,000 Jews in German-occupied Kiev in September 1941. The film is produced by Loznitsa’s Atom & Void, with support from The Foundation and Babyn Yar Holocaust Memorial Center.
Contact: Atoms & Void

To you. Shlomi Elkabetz
Israeli filmmaker Elkabetz returns to Cannes for the first time since the death in 2016 of his sister and creative collaborator Ronit Elkabetz, with a fraternal tribute to her life and work. The larger-than-life actress’s numerous credits include Late Marriage and The Band’s Visit but her defining role was as the unhappily married protagonist battling to secure a divorce from a religious court in Gett: The Trial Of Viviane Amsalem — the final film in a trilogy of works she co-wrote and directed with her brother. It premiered in Directors’ Fortnight in 2014, after the first film To Take A Wife played in Venice in 2004 and the second film Shiva opened Critics’ Week in 2008.
Contact: Playtime

To you. Ye Ye
Chinese artist Ye Ye makes her feature debut with this documentary about Shanghai’s No.6 People’s Hospital, one of the biggest in the populous Chinese city. The film presents a picture of contemporary Chinese society, told across a gallery of interconnecting stories that follow medical staff, patients and relatives of the sick and dying. Ye Ye is a science graduate and multi-disciplinary artist whose work spans the fine arts, design, special effects, architecture and land art. The film is produced by Jean-Marie Gigon at French production company SaNoSi, which previously presented The Grand Bal at Cannes.
Contact: Jean-Marie Gigon, SaNoSi Productions 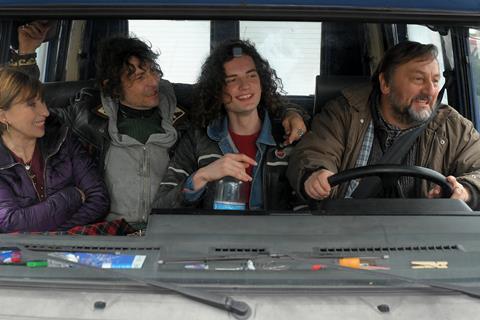 To you. Maxime Roy
Expanding on the world of his award-winning short Beautiful Loser (2018), Roy’s feature debut is about an ex-junkie struggling to stay clean while being a father both to a new baby and his 18-year-old son. TS Productions previously produced Denis Villeneuve’s Oscar-nominated Fires (2010) and Samah Zoabi’s Tel Aviv On Fire, which debuted in Venice’s Horizons in 2018. The Heroics will be distributed in France by Pyramide, which also handles international sales.
Contact: Alberto Alvarez, Pyramide International

Mariner Of The Mountains (Bra-Fr)

Dir. Karim Aïnouz
Brazil-born Aïnouz returns to Cannes after taking the top prize in Un Certain Regard with Invisible Life in 2019. Flirting between fiction and documentary, his new film explores the bond between Algeria and Brazil through the lives of his parents, telling the story of a woman from Ceara, northeast Brazil, who falls in love with an Algerian living in the US.
Contact: The Match Factory

To you. Noemie Merlant
My Beloved, Mon Amour marks the feature directing debut of French actress Merlant, who won a Lumiere Award and was César-nominated for her performance in Céline Sciamma’s 2019 Cannes Competition title Portrait Of A Lady On Fire. She also stars in My Beloved, Mon Amour as a soon-to-be-married woman who sparks an attraction with a much younger Romany man. The film is produced by Pierre Guyard for Nord-Ouest Films.
Contact: Boutique Movies

To you. Andrew Muscato
Documentary filmmaker Muscato (Mooch, Muhammed Ali: A Life) brings the party to Cannes with this film set during a concert given by actor Bill Murray and musicians Jan Vogler, Mira Wang and Vanessa Perez one summer evening in Athens. Produced by Muscato’s own Connecticut-based Makuhari Media, the film is, according to the festival, “filled with what we love about Bill Murray, what we love about music… and this desire to find oneself after the dark clouds of the global epidemic”.
Contact: Makuhari Media

The Story Of Film: A New Generation (UK)

To you. Mark Cousins
Belfast-born Cousins’ 15-hour The Story Of Film: An Odyssey was first broadcast on UK television in 2011, and played in its entirety at that year’s Toronto International Film Festival. Now he presents this 160-minute sequel, focusing on world cinema from 2010-21, from Todd Phillips’ Joker to Apichatpong Weerasethakul’s Cemetery Of Splendor. Cousins’ documentary The Storms Of Jeremy Thomas plays in this year’s Cinefondation programme.
Contact: Ana Vicente, Dogwoof Sales

Dirs. Apichatpong Weerasethakul, Jafar Panahi, Anthony Chen, Laura Poitras, David Lowery, Dominga Sotomayor, Malik Vitthal
One of three films from Neon that plays in official selection (the others being Memory and Titanium), portmanteau The Year Of The Everlasting Storm blends seven personal segments shot during the pandemic. Five of the directors have played Cannes before: Uncle Boonmee Who Can Recall His Past Lives Palme d’Or winner Apichatpong (back in Competition this year with Memory), Panahi (3 Faces), Chen (Ilo Ilo), Poitras (Risk) and Lowery (Ain’t Them Bodies Saints). Neon will release in the US. Contact: The Match Factory 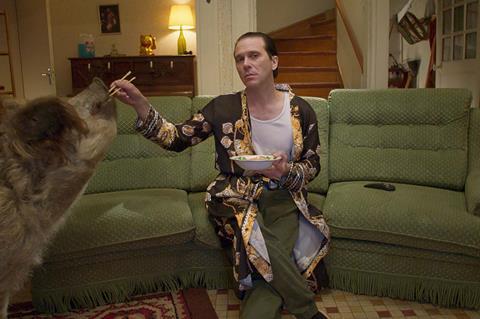 To you. Jean-Christophe Meurisse
Stage director/writer Meurisse arrives in Cannes from a run with his company Les Chiens de Navarre at Parisian theatre Bouffes du Nord. Following his debut Apnea (Critics’ Week 2016), his new black comedy — for Mamma Roman and Rectangle Productions — is about a couple out to win a dance competition. The cast includes Blanche Gardin and Denis Podalydes, who are in official selection with Bruno Dumont’s France and Arnaud Desplechin’s Deception, respectively.
Contact: Best Friend Forever

To you. Audrey Estrougo
For her sixth feature, France’s Estrougo dives into the world of real-life rap music, dramatising the story of two talented young musicians in the socially volatile environs of 1990s Paris who form influential hip-hop band Supreme NTM. Supreme, which will be distributed in France by Sony Pictures Entertainment, is produced by France’s Nord-Ouest Films along with France 2 Cinema and Belgium’s Artemis Productions.
Contact: WTFilms

Dirs. Arnaud Larrieu, Jean ‑ Marie Larrieu
The eighth feature from writer/director duo the Larrieu brothers, following such films as Happy End (2009) and To Paint And Make Love (Competition, 2005), is also their first musical. It follows 48-year-old singer Tralala (Mathieu Amalric) who embarks on a search for the Virgin Mary and adopts the identity of a missing guitarist. tol-de-rol is produced by SBS Productions, which is also behind Paul Verhoeven’s Competition title Benedetta.
Contact: Alberto Alvarez, Pyramide International

Cinema For The Climate 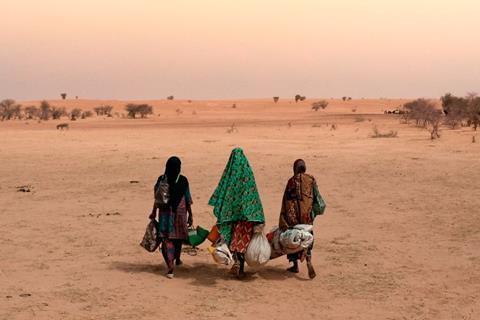 To you. Aïssa Maïga
Born in Dakar but raised in France, actress Maïga (a César nominee in 2007 for bamako) quickly follows up her Canal+ TV documentary Black Gaze (co-directed with Isabelle Simeonie, and broadcast in March this year) with Above Water (Walk on water). Filmed in Niger from 2018-20, it follows a 12-year-old girl who must walk many miles every day to fetch water — but the building of a well could transform village life.
Contact: Sébastien Cauchon, Orange Studio

To you. Cyril Dion
Dion and Mélanie Laurent won the best documentary César with 2015’s Tomorrow (Tomorrow), focusing on people’s positive solutions and actions on climate change. Dion followed up three years later with After tomorrow, co-directed with Laure Noualhat. Now he accompanies two teenagers around the world as they investigate potential solutions to species extinction and the collapse of biodiversity.
Contact: Sébastien Cauchon, Orange Studio

Bigger Than Us (Fr)

To you. Louis garrel
Following a Cannes Critics’ Week bow with his first film as director Two Friends (2015), and then a Toronto launch for A Faithful Man (2018), actor/filmmaker Garrel returns to Cannes, starring opposite Laetitia Casta in a drama about a married couple who discover their 13-year-old son has been selling the family’s valuables to finance a secret ecological project in Africa he believes will save the planet.
Contact: Antoine Guilhem, Wild Bunch International

I Am So Sorry (China-Fr)

To you. Zhao Liang
Chinese documentary filmmaker Zhao’s most recent features premiered at Venice in 2015 (Behemoth, about the environmental impact of heavy mining) and Berlin in 2011 (Together, about HIV-positive people in China). He now returns to Cannes, where his film Petition, about ordinary folk who petition the Chinese government, played as a Special Screening in 2009. The new film, Zhao’s first international project, explores the dangers of nuclear energy.
Contact: Rediance

To you. Rahul Jain
Jain’s Machines (2016), an observant documentary portrait of a gigantic textile factory in Gujarat, played Amsterdam’s IDFA, Sundance and CPH:DOX, winning several festival prizes including for Rodrigo Trejo Villanueva’s cinematography. Now the Indian filmmaker offers this Participant-backed documentary about pollution in New Delhi and the “invisible demons” that are the fine particles in the atmosphere.
Contacts: Rob Williams, Participant; mk2 Films

Many Thanks To The following Website For This Valuable Content.
Cannes 2021 line-up guide: Special and Midnight Screenings, Cinema For The Climate titles | Features