Paul WS Anderson and Milla Jovovich have had a fruitful relationship in front of and behind the cameras since they filmed the first installment of ‘Resident Evil’ almost 20 years ago. The popular action and horror saga reached six film installments and accumulated a total of 1.2 billion dollars raised, which makes it the highest grossing video game franchise ever.

With this success behind him, it stands to reason that Anderson has ignored the alleged curse of video game adaptations and has ventured to move another famous game of Capcom to the big screen. ‘Monster Hunter’ is a passion project that dates back more than ten years during his long periods living in Japan, where Anderson discovered the epic monster hunting saga and proposed to the company to turn it into a movie show.

Also to no one’s surprise, the British filmmaker once again has the same team, including his real-life muse, talisman and wife Milla Jovovich, who takes on the shoes of a tough action heroine again in a digital outburst. large scale that was clearly born with the intention of following in the footsteps of ‘Resident Evil’ and becoming a multi-installment saga. Of course, as long as the public embraces it and the pandemic allows it.

To introduce the viewer to the world of ‘Monster Hunter’, Anderson decided it was appropriate to anchor the story in reality. To do this, the film starts with a group of soldiers from our world (Diego Boneta, Meagan Good, TI) led by Lieutenant Artemis (Jovovich), who during a reconnaissance mission in the desert are taken by surprise to an unknown world and hostile in which they will face huge and terrifying monsters. There, Artemis meets a hunter (Tony Jaa) and runs into a colorful crew led by Ron Perlman (who, by all accounts, comes out very little), all with one goal in common: to protect their world from monstrous giants. 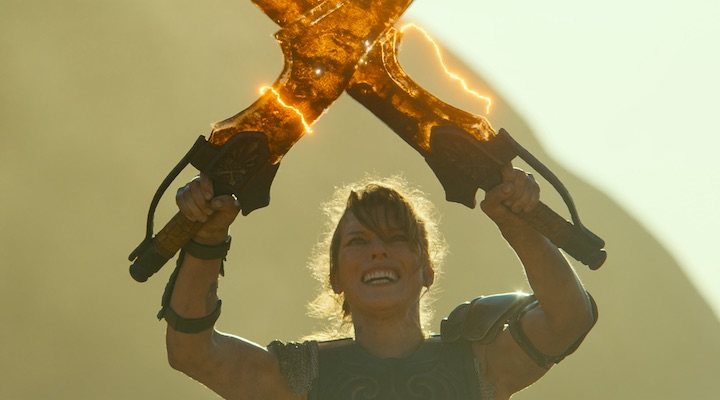 The overwhelmingly simple plot is designed to appeal to both fans of the video game and neophytes who are simply looking for an action movie to pass the time, without worrying about having to know the rules of its mythology beforehand. Jovovich’s character is an original creation that serves as an entry point to this reality populated by the most impressive beasts, where Anderson can already afford to introduce creatures, characters and game elements (including its signature oversized weapons) as a nod to players.

Knowing the team behind it and knowing the type of movie it is about, it is no surprise that ‘Monster Hunter’ is a deafening action show saturated with digital effects and rather empty when it comes to plot and characters. With a nonsensical script that doesn’t complicate life too much, the film is basically a succession of set pieces and exaggerated fights in which Jovovich just survives. There is no more, which does not have to be a problem if we know what we are going for, but it does not offer any incentive for those who are looking for that “something else”.

The best, the Jojovich in super soldier plan

It goes without saying that fans of ‘Resident Evil’ (Anderson’s saga, it is understood) will surely enjoy ‘Monster Hunter,’ because despite being larger in scale, it shares the same DNA and many of its architects. Among them, his visual effects supervisor, Dennis Berardi, in charge of designing the monsters of the film from the creations of the video game.

However, the best thing about ‘Monster Hunter’ is not its monsters, but its main heroine. With the creatures of the film, Anderson seeks to recreate that sense of amazement that we all experience when we see the dinosaurs of ‘Jurassic Park’, but it fails for two reasons: we are more than used to it and when you have already seen the first monster, the rest It is mere pounding repetition.

Fortunately, Jovovich rises above the film playing Lieutenant Artemis, a role for which he underwent harsh physical and military training that makes her a fusion between super soldier and superhero. Looking for depth in her character is in vain, but at least she gives us just what we expect from her, presence and action in a powerful butt-kicking heroine. 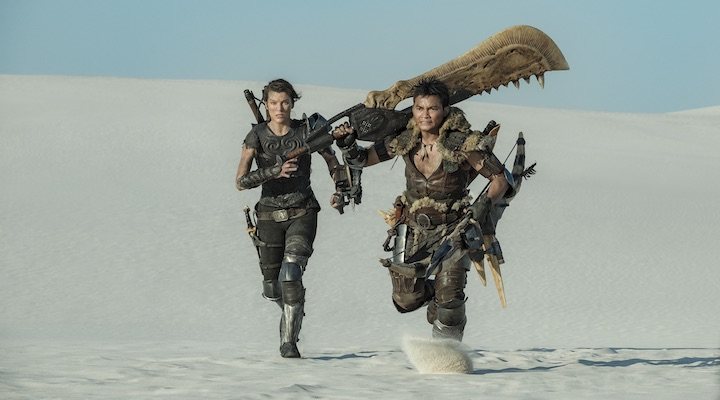 Also noteworthy is his relationship with the character of martial arts expert Tony Jaa, who plays a native warrior from the world of monsters. Both actors establish a very nice dynamic and generate grateful moments of respite between the thunderous digital maelstrom and the world-building. If Anderson had relied more on that human connection, perhaps ‘Monster Hunter’ would have been more than just an empty show. But he didn’t seem interested, and after ‘Resident Evil’, we can’t blame him either.

Preamble to a possible saga

Paul WS Anderson knows his audience. With ‘Monster Hunter’ he does not intend to fool anyone. His cinema has never been characterized for being the most original or intelligent, but for providing an experience as similar as possible to that of an action video game or a theme park attraction. Simply. Maybe that’s why it has succeeded where others have failed, because he has known how to measure his ambition and has limited himself to doing what he knows works for him. That is, they know what you want and they give it to you, although for some that is not enough.

With barely an hour and a half of footage and an ending that makes it very clear that there is a larger universe to explore, ‘Monster Hunter’ seems more like a virtual initiation experience than a movie. On the good side, it doesn’t take long, on the bad side, it gives the feeling that something is missing. It’s like a preamble or a video game demo that prefers not to use up all your cartridges for the next game. One that, considering current circumstances, is not guaranteed.

The best: The chemistry between Milla Jovovich and Tony Jaa and the powerful soundtrack with synthesizers.

Worst: Which is completely hollow and lacks autonomy as a film.

Many Thanks To The following Website For This Valuable Content.
Criticism, ‘Monster Hunter’ knows what you want and gives it to you, but it is not enough