CARTAGENA. Up to 32 more cruises have confirmed their visit to Cartagena until next December 23, which means the arrival of close to 30.00 more tourists in the months from September to the end of the year. To the pioneers Tui Cruises and Aida Cruises, which were the first to dock in the city, are now followed by larger and smaller shipping companies, with large passenger vessels, such as the Costa Diadema, which houses about 2,500 tourists, and others much smaller and exclusive, who put the note of luxury in the port of the city.

Through the port of Cartagena you can see some of the dream cruises that go around the world, movie sets, residential yachts in whiche having a lot of money is not enough to board, adult-only boats, those in which the distinction, made a boat, is exclusive for a small group of passengers O boats that in themselves are a piece of history among the most unique ships that navigate our seas and oceans.

Here we have a small representation of glamor and exclusivity made of wood:

The World, the largest residential yacht in the world. First arrival: September 24

‘The World’, the andlargest residential area in the world, is already on the water. Having a lot of money is not enough to get on board. It is the perfect combination of private yacht, luxury vacation residence and exclusive club membership, which only the 150 owning families, from 19 countries, can enjoy.

Since its launch in 2002 it has been going around the world. Until 2020, it stopped sailing due to restrictions imposed by the pandemic. Now, the owners return ‘home’ after the implementation of the comprehensive Covidshield program, which ensures the vaccination of all its residents and crew, and after introducing new health and safety measures on board.

This ship was built in 1998 by the French shipyard of Alstom Leroux Naval shipyards to do exclusive cruises around the world. The ship changed ownership in 2017 to the Grand Circle Cruise Line owner. This company is a leader in small maritime and river cruise ships, and invested more than four million euros in the reform of this ship.

Just 100 meters long, the Gran Circle ship can accommodate 89 passengers in its 45 cabins, all exterior. It is specialized in adventure cruises for which it has in its interior inflatable boats that allow passengers to be transferred to any point of the coast. Precisely because of the type of trips it offers experts are always on board to explain and guide the passengers on the different excursions. Thanks to its small dimensions (100 x 14 x 3.5 meters) and exceptional yacht-like design, it can access the vast majority of ports in the world.

This ship, in its 19 years of life, has had three names and has operated for three different shipping companies, all of them focused on a very exclusive passenger.

Taking into account its small dimensions, this ship has all the comforts of a large cruise ship combined with the attentions of a large luxury yacht; All this can be enjoyed by the 89 passengers traveling on board, attended by a crew of 60 professionals. 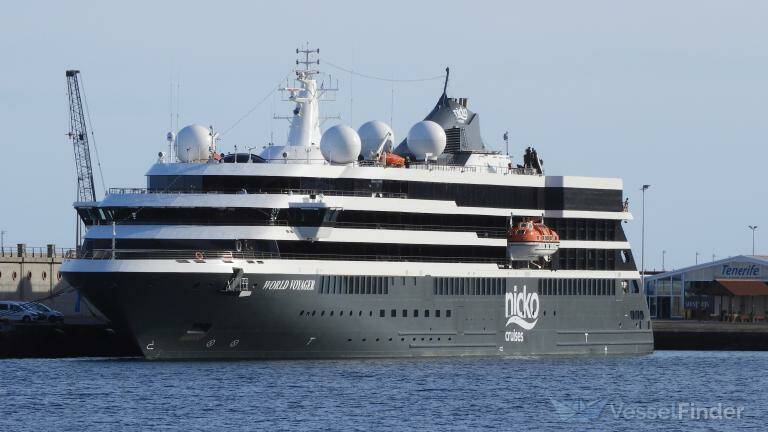 The World Voyager
It is a luxurious ship put into service this year 2021. Have 126 meters in length, 86 cabins to accommodate up to 200 passengers and is operated by 125 crew members. Its manufacturing cost was 70 million euros and it was the work of the Portuguese shipyard WestSEA (Viana do Castelo).

This ship belongs to a series whose other ‘brothers’, also in the luxury cruise segment, are: World Adventurer, World Explorer, World Discoverer, World Navigator, World Seeker and World Traveler.

The ship belongs to the Portuguese shipping company Mystic Cruises and it is chartered by the German Nicko Cruises for German tourists. 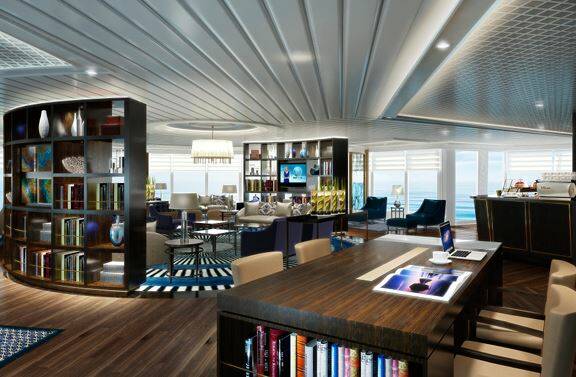 The Star Legend, with capacity for 212 passengers, was inaugurated in 1988 and completely remodeled in 2014 when it became part of the fleet of Windstar Cruises.

Construction of the “Viking Royal Queen” began in 1990 by Schichau-Seebeckwerft in Bremerhaven, Germany. It was the last ship to be built for the Royal Viking Line and the smallest. During her service as “Royal Viking Queen”, she was part of the world’s leading cruise ships, consistently voted among the 10 best cruise ships in the world by various publications.

Appeared in the 1997 film Speed 2: Cruise Control under the name “Seabourn Legend”. In the film, LAPD Police Officer Alex Shaw (Jason Patric) and his girlfriend Annie Porter (Sandra Bullock) are trapped on the ship, where the navigation computers have been reprogrammed by a hacker (Willem Dafoe), placing the ship on a collision course with a supertanker. 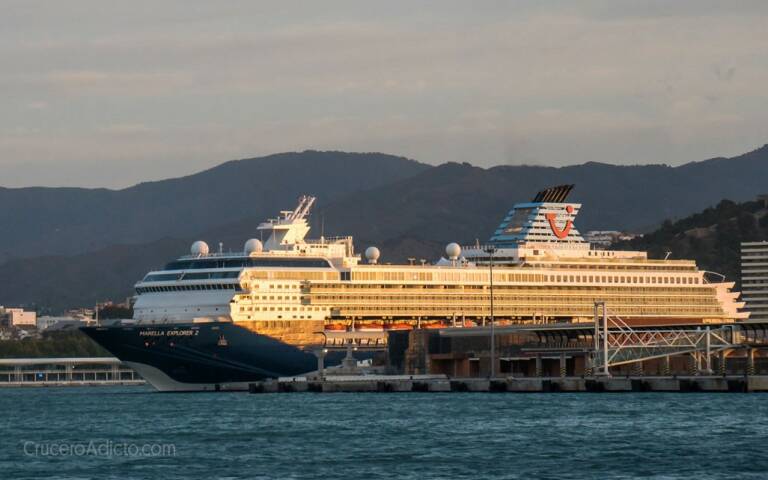 The Marella Explorer 2, has been completely renovated in the shipyards of Navantia on Cádiz, and has a length of 246 meters, with the possibility of housing 1,814 people, although 962 are planned for Cartagena.

Marella Cruises is adapted exclusively for adults and most of its passengers are British or Irish nationals.

If we had to describe the boat we can highlight its interior finish with a classic touch but with a very contemporary palette and shapes, highlighting the great color in bars and lounges. Its central pool is surrounded by a relaxation room with tables and chairs so that we can eat or enjoy a drink overlooking the pool. 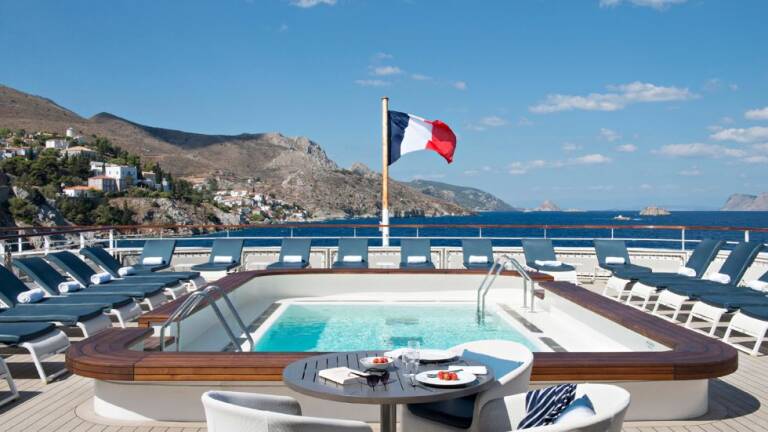 In 2015 was born Le Lyrial like its sister ships (Le Boreal, L’Austral, Le Soleal) embodies the subtle alliance between the luxury, intimacy and well-being which is the Ponant signature. The elegance of its exterior and interior lines and its even more intimate dimension (only 122 cabins and suites) make this yacht exclusive and innovative in the cruise market.

The destinations of this magnificent yacht have inspired her interior design that features a subtle variation around a palette of blues.

Just like the others, for all intents and purposes Le Lyrial can be compared with a big yacht. It has the most advanced technologies when it comes to protecting the environment and with its small size it can reach ports and destinations inaccessible to the largest cruise ships. 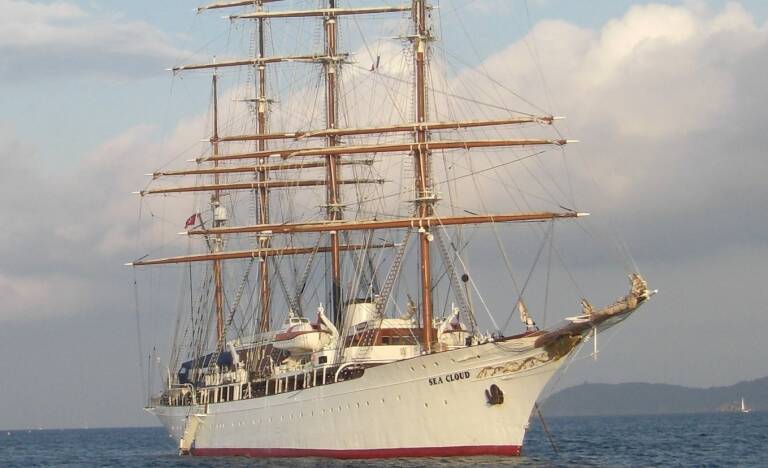 Sea Cloud. The oldest passenger ship in the world. Next arrival: October 21

The Sea Cloud it’s a sailing cruise of the line Sea Cloud Cruises. From 2020, It is the oldest oceanic passenger ship in the world. Launched as a private yacht in 1931, served as Time ship for the United States Coast Guard and the United States Navy during World War II, when it became the first racially integrated US military warship since the American Civil War.

After the war, Sea Cloud was returned to private property, serving as a yacht for numerous people, including as a presidential yacht of the Dominican Republic . As of 2020, the ship sails in Europe and the Caribbean as part of a fleet of cruise ships operated by Sea Cloud Cruises GmbH of Hamburg. 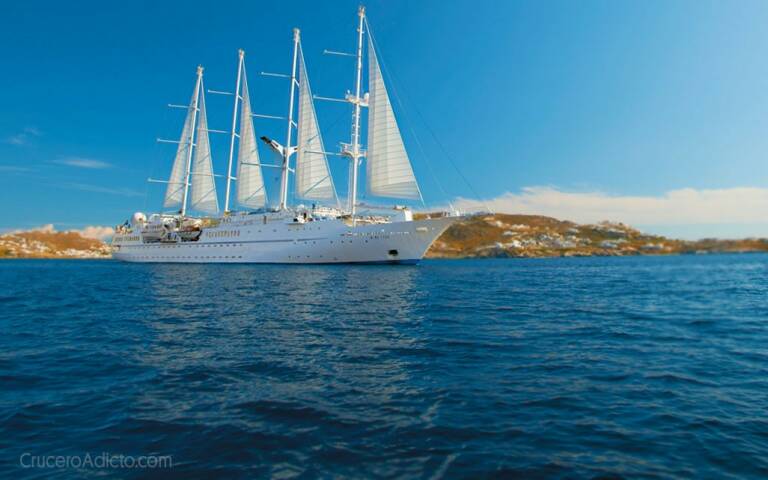 The Wind Star It is a sailboat of 4 masts, built in 1986 and renovated in 2012. It has 4 bridges and 4 masts of 62 meters each. The set of its sails has an area of ​​almost 2,200 square meters whose elaboration has been assisted by computer. It offers a very marine interior decoration, based on woods and elegant furniture. The gastronomic offer, the extensive wine list, the personalized service and the family atmosphere, are the real reasons whyso it is worth embarking on this type of boat -for just over 1,500 euros the most affordable price up to 10,200 the most expensive-.

The ship has a swimming pool, a Jacuzzi, a solarium, a library, a restaurant, a lounge and some bars. 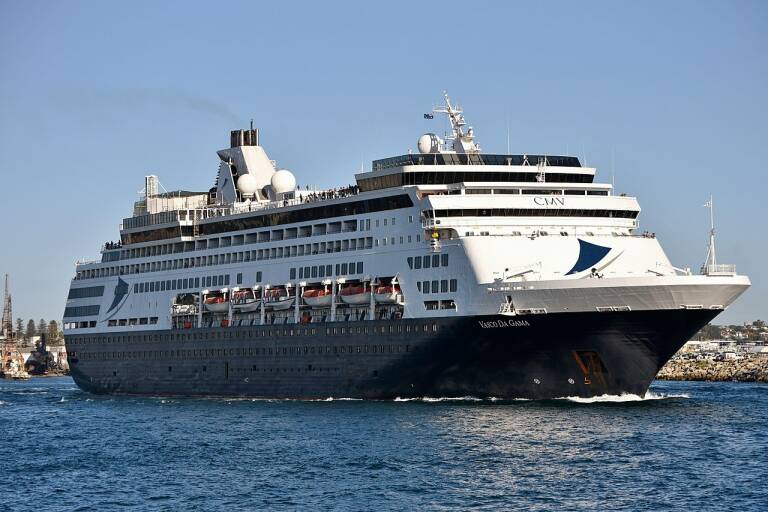 With 219 meters long and 30 meters wide, 13 decks, 630 cabins, the Vasco de Gama was launched for the first time in 1993. The current Vasco da Gama it was one of the first modern cruise ships to be built by the Italian shipyard Fincantieri, and the first one who ordered Carnival Corp. for the fleet of Holland America Line (HAL) after acquiring it in 1989.

Mystic Ocean invested in the boat, mainly in increasing environmental and energy performance and in digitization, making this project a fantastic example of circular economy applied to the shipping industry. Giving a new life instead of scrapping, the boat will be reused again for one or more decades. The boat was updated according to the strictest international standards, it was renovated with the highest comfort available on the market, thus exceeding its glamor.

Hebrydean Sky, a vessel for expeditions to the Arctic. Next arrival: November 6

El Hebridean Sky is a cruise ship owned by the London based cruise company Noble Caledonia. As an ice-rated vessel, it has operated as an expedition cruise in Antarctica and in the Arctic. It was also known under the names renaissance VRenaissance II, Regina, Renai I, Sun, Sun Island, Corinth II, Sea Explorer, Sea Explorer I.

Designed to operate almost anywhere in the world, this ship accommodated up to 120 passengers in 59 cabins. The lounge and dining room were large enough to accommodate all passengers at the same time.

Many Thanks To The following Website For This Valuable Content.
Glamor and film exclusivity: the rich disembark in Cartagena