The Eurostar, the train that connects Paris and London, is probably the best metaphor for Emma Mackey’s head. Your spirit animal. In addition to being the route that she has traveled the most in her life, according to her own confession. Daughter of a French father and a British mother, Emma Mackey (25 years old) was born in Le Mans, France, in the heart of the Loire region. He spent his entire childhood and adolescence there, escaping summers to England with his maternal family. Growing up in France she felt English, and when she moved to the UK at 17 to study English Language and Literature at the University of Leeds, she began to feel more French. She cannot fight against that duality, against that feeling foreign in her two homes. “I have already accepted that I am not the same person in both languages, because my sense of humor, my head and my vocabulary change depending on the culture in which I am expressing myself,” he reflects. «I find it more interesting as I get older, I no longer feel like I have to choose one or the other. It took me a while, but there I am. It is a gift and I am very grateful, especially to my mother, who worked hard so that my brothers and I could speak English at home ».

And it looks like the Eurostar will continue to be Emma Mackey’s third home for years to come. The actress will continue to take advantage of that duality and bilingualism (although her favorite word is “fuck”, in Spanish, learned from one of her best friends in London). After catapulting to fame with her first role, that of the brutally honest and rather rebellious Maeve in Sex Education, the actress has great projects in both countries, in both languages. Eiffel, an epic romantic drama in which she plays Adrienne, the great love of Gustave Eiffel (played by Romain Duris), author of the Parisian tower that Mackey, embarrassed to admit, has never climbed. AND Death on the Nile, the adaptation of the homonymous novel by Agatha Christie, directed by Kenneth Branagh with a stellar cast (Gal Gadot, Annette Bening, Jennifer Sanders). If the covid allows it, the two titles will see the light this fall, before the end of the year, just after the premiere of the third season of Sex Education (September 17), the reason why he accumulates five million followers on an Instagram account to which, sorry, he ignores. Especially after the confinement that, incidentally, he spent in Corsica, at his parents’ house in the countryside, taking up the reading and contemplation that the year and a half of media attention had stolen from him.

What Sex Education It has been such a great success (more than 40 million viewers, according to official data), it seems that it has been in the industry for the longest time, but it has barely been two years since its debut. Do you still have many moments of not believing what is happening to you?
Yes all the time. I never take anything for granted and it seems so absurd that I am dedicating myself to this, that I work among these people, that I put myself in the skin of a character, that I can live in other countries. I don’t know if I will ever get over this feeling. I suppose it’s a classic among young actors, but I feel like an impostor most of the time. What am I doing here? Because I am here? Are you sure you want me? I guess the important thing is to find the balance between the imposter syndrome, feeling a little out of place and accepting that you have permission to be here, that you have something to offer to continue growing and being a better person tomorrow. I guess it’s okay to keep that little doubt always, to want to continue learning every day, it’s okay to feel that way even if it’s a little scary.

Due to the pandemic, did you have to shoot the third season of Sex Education and Eiffel?
That’s how it is. We shot a first part of Eiffel just before everything exploded and we continued after, with all the security measures. In addition, in this second part we shot the flashback, the story of how Adrienne and Gustave Eiffel meet in Bordeaux when she was still 18 years old, how they fell in love and were about to marry until their father prevented it, so it was easy to go back to that, it almost seemed like a different movie ( another wardrobe, another hairstyle…). During the week he shot the series and on the weekends the movie. It was a bit of a schizophrenic life for two months, but I’m not complaining, I’m happy with everything that is happening to me.

It has not been released in theaters yet, but they already call Eiffel “the Titanic French ». It is a great production for France.
Yes, I don’t know if Martin Bourboulon, the director, had it in mind when we were working on it, but I find the comparison funny. I guess it’s because Titanic is an emblematic film that represents love at first sight, with that historical element of the Titanic, We knew what was going to happen to the ship and we also know that the Eiffel Tower, despite the difficulties that the film tells, was going to end up being built. But the suspense and the pacing are maintained by the romance, which is what happens to these two characters, so I suppose there is some similarity, but we are making our own movie. And I, while preparing my character, did not think at any time about any movie, or about other women. Adrienne really existed, but only her name is known, that she was from a good family and that she almost married Eiffel, we had a lot of freedom to invent her. 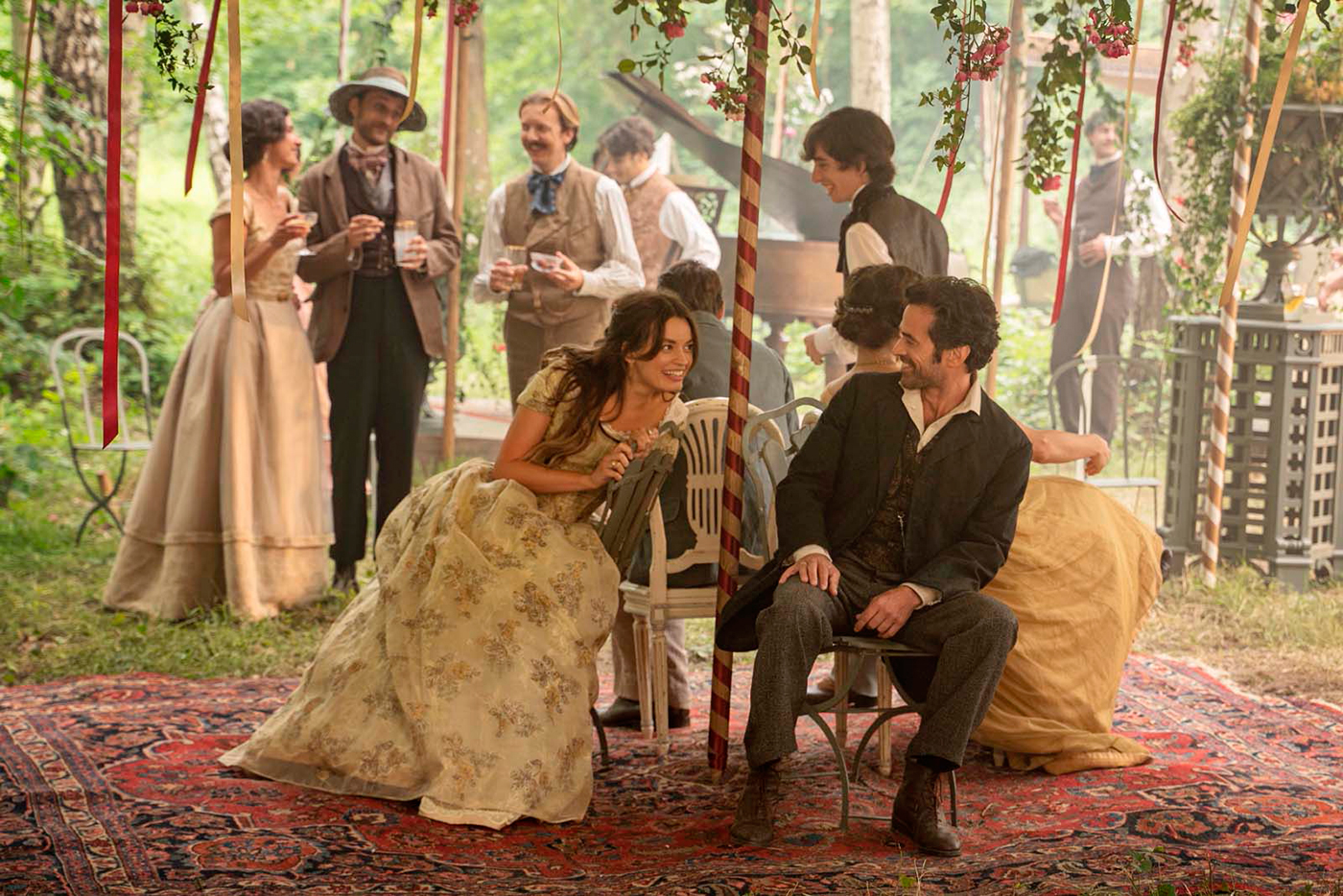 In the movie ‘Eiffel’.

Eiffel it is the first film that Emma Mackey shot in French. It also marked his longest stay in France after leaving the country at age 17 to study at university. After graduation, she moved to London and began taking acting classes. She worked as a babysitter while she was training. Thanks to a teacher, he got representation and that’s how the casting from Sex Education. Through the series, she has emerged overnight as a visible face of Generation Z, open to talking about sex, sexual and gender identities, and abuse. In the third chapter of the first season, his character aborted. Female masturbation is not taboo. “The series set the bar ridiculously high for my next projects,” he confesses. And now he is looking for proposals “that contribute something to the viewer.” But perhaps trying to overcome that pressure and tired of being confused with Maeve, asked about what united them (honesty, she has repeated tirelessly), in her leap to the cinema she has gone to the other extreme: period stories, epics, great romances. In that they agree Death on the Nile, Eiffel and the last movie that he has shot, Emily, donde interpreta a Emily Brontë. Wuthering Heights it was one of the books she read during confinement, preparing for a role that seemed made for her. “I studied English literature in Leeds, with this film I have returned to Yorkshire, playing a writer … many circles seem to close in my life with her,” he says. And warn that, as Eiffel, “is not a biopic. It is the interpretation of certain biographical elements of Emily’s life, of her family, intertwined with elements of Wuthering Heights, the only novel that he published ».

Was it very different to shoot in French?
Yes it was. But not so much for the shooting itself as for the fact of returning to France after so long, returning as an adult woman, after having left at 17. I am completely different now. That my first film in French is about the Eiffel Tower, with Romain Duris, who is one of the most exquisite French actors … I put a lot of pressure on myself and it’s weird because I’ve spent more years of my life in France than in the UK, but since I feel like my coming of age has happened in England, I was nervous about being French again. That is why I think it took a few days for me to feel happy and secure in my Frenchness.

Do you ever think what would have happened if you hadn’t done the casting from Sex Education?
I try not to think about it, I have never considered it. Yes, it has completely changed my life and it is a little crazy how quickly everything has happened, but I feel like I am here for a reason and that everything that has happened, the choices that I have made, have led me to where I am today. I try to take it day by day, and I also know that I want to do a lot of things, not just act. I want to live other things, I have plans in my head, dreams of other worlds and of creating something.

What are those dreams or those other worlds that you want to explore?
Actually, it is a bit in the same field, I would like to direct one day, to be confident enough to start writing and directing. And I also want to go back to work for some charity. I did it for a while … Besides, I was a translator, I would like to be able to continue studying languages. Although what I think about most lately is permaculture and organic farming, being of use to the community is very important to me. 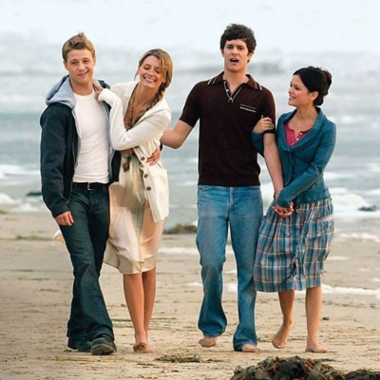 A rich girl, a suburban youth and a millionaire neighborhood: the cocktail that turned The OC into a phenomenon that seeks to return

Many Thanks To The following Website For This Valuable Content.
“I feel like an impostor most of the time. What am I doing here? Are you sure you want me?”