62. MinuteThe Netherlands have scored at least twice in the last 15 victories at European Championships.

60. MinuteThe VAR confirmed the goal, Dumfries was on the same level as two Ukrainian players in front of the goal.

59. MinuteThe hit will be checked briefly.

Goal! NETHERLANDS 2-0 Ukraine. Dumfries asserted himself in the right in the penalty area against Mykolenko, whose defense attempt lands at the feet of Wout Weghorst. The Wolfsburg takes the ball from half right and shoots placed in the short corner.

56. MinuteWith a little luck, the ball comes to Weghorst in the penalty area, who can book his first degree. But this time Bushchan is there.

54. MinuteWith the first finish after the break, the Netherlands deservedly take the lead and thus rewarded themselves for a strong first round.

Goal! NETHERLANDS 1-0 Ukraine. Mykolenko miscalculates on the outside against Dumfries, who can break through and brings the ball sharply into the middle. Bushchan fends off the cross to the edge of the penalty area. Georginio Wijnaldum rushes up and slams the ball into the upper left corner.

50. MinuteDe Jong crosses from the half-field behind the second post. From there Dumfries heads the ball in the middle, where Weghorst only knows how to help himself with a foul against Bushchan.

48. MinuteThe Netherlands are trying to regain control, but the pace is not as fast as in the closing stages of the first round.

46. MinuteThe game is running again. Both teams came out of the dressing room unchanged.

In a very entertaining game, the score is 0-0 after 45 minutes. But the Netherlands were wide awake from the start and pushed for the lead. Bushchan kept zero with numerous good saves. Ukraine was also able to set some dangerous counterattacks.

45. MinuteYaremchuk spits the ball in front of the feet of Yarmolenko in the penalty area on the right, who passes de Vrij in the six-yard area, but then gets stuck against Stekelenburg.

43. MinuteAt the end of the first half, the Elftal pushes again, but Ukraine can still defend the 0-0 in the direction of the break.

41. MinuteDumfries is completely free on the second post with the perfect cross from Depay, but does not even get the header on goal.

39. MinuteBushchan keeps his team in the game once more. A defensive attempt that is too short comes to Wijnaldum on the edge of the penalty area, who pulls off volley. With a good reflex, the keeper fends off the ball, which was still slightly deflected, to the side.

37. MinuteThe second corner of the Netherlands is taken out briefly and comes in the back to van Aanholt, who is looking for the end from 23 meters. The shot grazes a good meter over the goal.

35. MinuteStark conquered de Jong and Depay deep in the opposing half of the ball. The ball came out to the right to Dumfries, who stuck with his cross.

33. MinuteInteresting reflection. The Netherlands have 60 percent of the ball possession, the Ukraine gets the same value in the duels they won.

31. MinuteThe next chance belongs to Yarmolenko, who lets the opponent run into space in the penalty area and then fails at Stekelenburg.

29. MinuteNow things are getting tricky on the other side, Yarmolemko is prevented from finishing by van Aanholt in the penalty area. Felix Brych immediately indicates that the Dutchman has resolved the situation fairly.

27. MinuteBut then Weghorst almost achieved the lead. He gets the ball played perfectly in the foot by Depay, but then sticks to the keeper.

25. MinuteAgain and again, Wijnaldum and Depay set the tone in front of the penalty area. Weghorst, who has had the least ball action in the Netherlands so far, is not yet in the game.

23. MinuteDepay is doing wonderfully because van Aanholt broke away in the back of the defense. Bushchan has to come out to defuse the situation on his own six-yard area.

21. MinuteDumfries wants to extend the run of Wijnaldum with the hoe, but he cannot prevail on the edge of the box against Matvyenko.

19. MinuteUkraine is now finding its way into the rooms better, the hosts’ initial offensive seems to be over for now.

17. MinuteMykolenko wins the running duel on the left. His cross is too sharp and Yaremchuk misses the header.

15. MinuteYaremchuk pulls from the right to the center and looks for the gap, but fails to hit the ball properly when he tries to finish from 17 meters. Even if the shot is deflected slightly, Stekelenburg grabs safely. 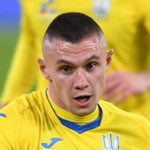 Now is the time for the change, Marlos Romero Bonfim takes over on the offensive for the injured Oleksandr Zubkov.

12. MinuteUkraine has to survive briefly outnumbered. The Netherlands makes no move to give up the attack.

11. MinuteZubkov limps off and immediately indicates that he needs to be replaced.

10. MinuteIt’s a brisk start in the Johan Cruijff Arena. The Elftal are looking for a quick lead, but Ukraine hold their own against it.

8. MinuteThis time Wijnaldum tries it himself. His shot from the edge of the box just goes over it.

6. MinuteWijnaldum maintains an overview in the center of the penalty area and lays across to the right, where Dumfrier has a good trajectory. But Bushchan shortens the angle decisively and clears with a good reflex to the corner.

4. MinuteYarmolenko pulls past Blind in the penalty area and wants to bring the ball sharply in front of the goal. De Vrij clears at the expense of a corner. Yarmolenko then heads over the gate.

2. MinuteIt’s going to be high. After a bad pass from Zinchenko, Memphis Depay immediately went into attack mode and passed four players in the direction of the penalty area. Bushchan can only bury the shot from 17 meters in the follow-up.

1. MinuteThe game is on in Amsterdam. The referee is Felix Brych, who is coming to this tournament for the first time.

Before the game startsIt is only the third meeting of the two teams and at the same time the first competitive game. In 2010 there was no winner, in 2008 the Netherlands won 3-0. Stekelenburg was already guarding the Elftal box 13 years ago.

Before the game startsThe Netherlands won the dress rehearsal against Georgia 3-0. In addition to Gravenberch and Depay, Weghorst also met. For the Wolfsburg it was the first goal in Oranje, he can start today from the start. Ukraine also celebrated a clear 4-0 victory over Cyprus last Monday.

Before the game startsBut with a view to the group opponents, advancement seems possible this time. Especially since Ukraine finished the qualifying group ahead of Portugal as the winner and wrested victory and draw from the reigning European champions.

Before the game startsOn the other hand, Andriy Shevchenko exudes great optimism. The former successful striker demands that his team make it to the round of 16. In the only two European Championship participations so far in 2012 and 2016, Ukraine was eliminated in the preliminary round.

Before the game startsFootball tactics have always been discussed in the Netherlands. Frank de Boer’s intention to play this tournament in the unfamiliar 3-5-2 did not necessarily meet with approval from the critical audience. Yesterday, a specially chartered mini-plane asked the Bondscoach to do the classic 4-3-3 with a banner above the final training session.

Before the game startsMaarten Stekelenburg begins in the box. The 38-year-old only started the season as a substitute goalkeeper at Ajax, now there is still a really big tournament to round off his long career. Marco Bizot and Tim Krul have to be content with the substitutes’ bench for now.

Before the game startsThe Netherlands are starting their first major tournament after seven years of abstinence on the big football stage. The failures of regular goalkeeper Jasper Cilessen, Virgil van Dijk and Donny van de Beek had been clear for a long time, now Matthijs de Ligt also has to pass. The Juventus center-back was hoping for a long time, but the groin injury is proving to be persistent.

Before the game startsWelcome to the 1st matchday of the 2020 European Championship in Group C between the Netherlands and Ukraine.

why Roma, confidence in success and working with Mourinho

After the US troops have withdrawn: China and its interests in Afghanistan

Great scandals in the history of the Olympic Games

why Roma, confidence in success and working with Mourinho