Lily-Rose Depp ensured she was the centre of attention with her twist on Chanel’s classic tweed suit as she attended the designer’s Spring/Summer 2022 show at Paris Fashion Week on Tuesday.

The daughter of Hollywood star Johnny Depp, 22, opted for a plunging dress with a black and yellow tweed print as she graced the front row for the fashion event.

Lily-Rose was accompanied by acclaimed actress Kristen Stewart, who also took inspiration from one of Chanel’s iconic looks in a pastle pink two-piece 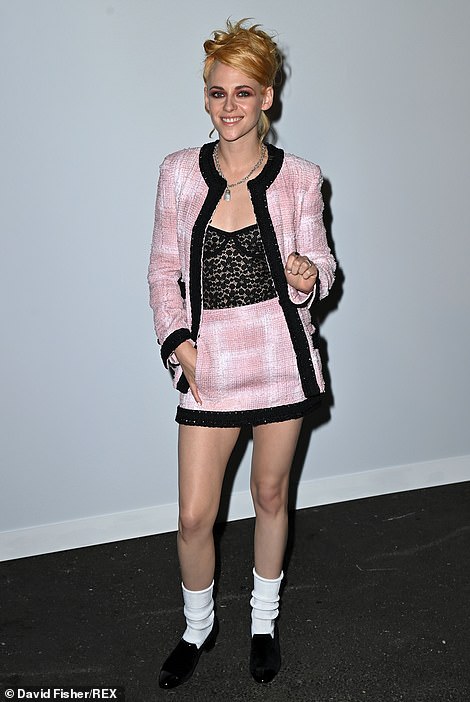 Standing out: Lily-Rose Depp ensured she was the centre of attention as she joined Kristen Stewart for the Chanel show at Paris Fashion Week on Tuesday

Lily-Rose showcased her svelte physique by posing in the low-cut yellow dress with an unsual silk panel around her middriff and frilled tweek skirt and front.

The fashion favourite finished her look with sophisticated black heels and her blonde tresses styled into loose curls.

The Chanel show saw an eye-catching mixture of bold colours with new takes on the classic Chanel suit, teamed with revealing monochrome swimwear and dramatic prints. 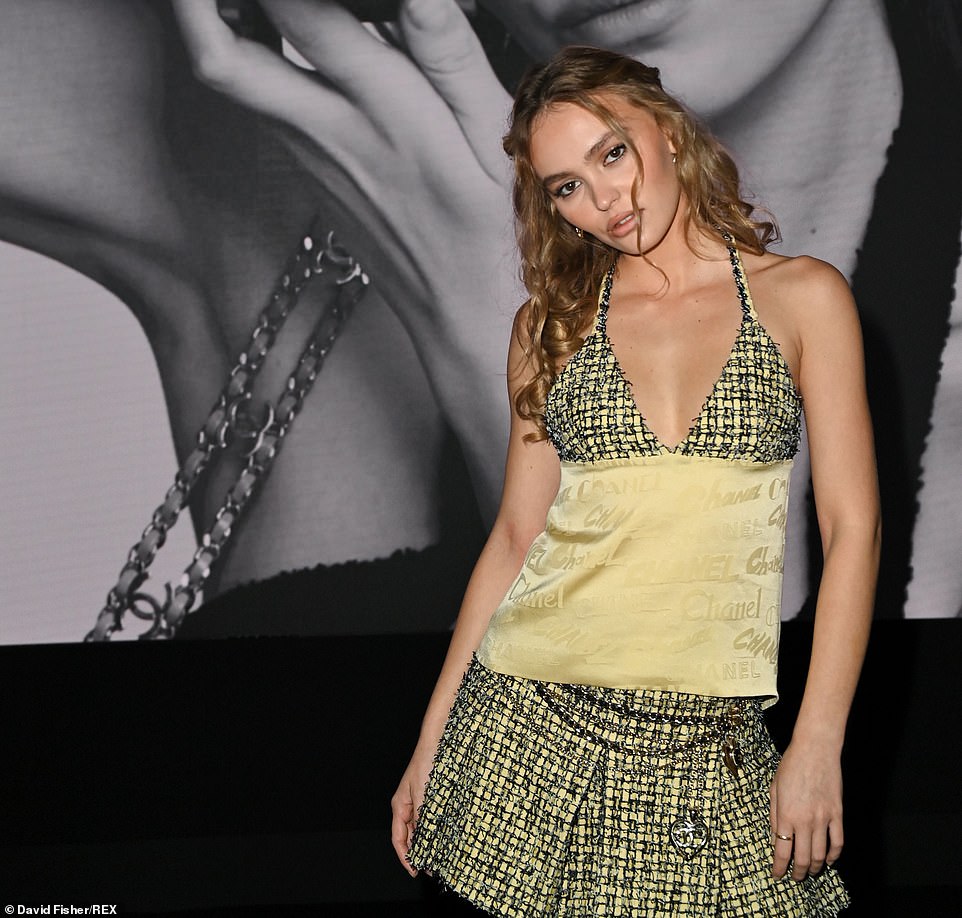 Fashion forward: The daughter of Hollywood star Johnny Depp opted for a plunging dress with a black and yellow tweed print as she graced the front row for the fashion event 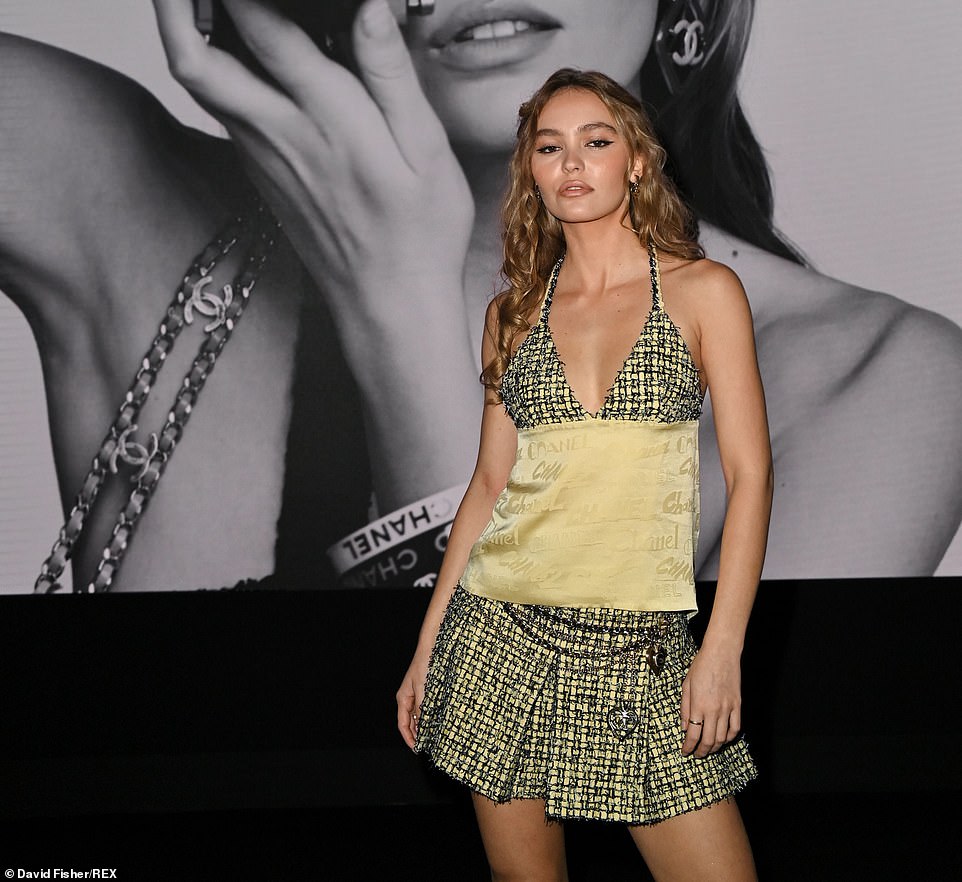 Gorgeous: Lily-Rose showcased her svelte physique by posing in the low-cut yellow dress with an unsual silk panel around her middriff and frilled tweek skirt and front 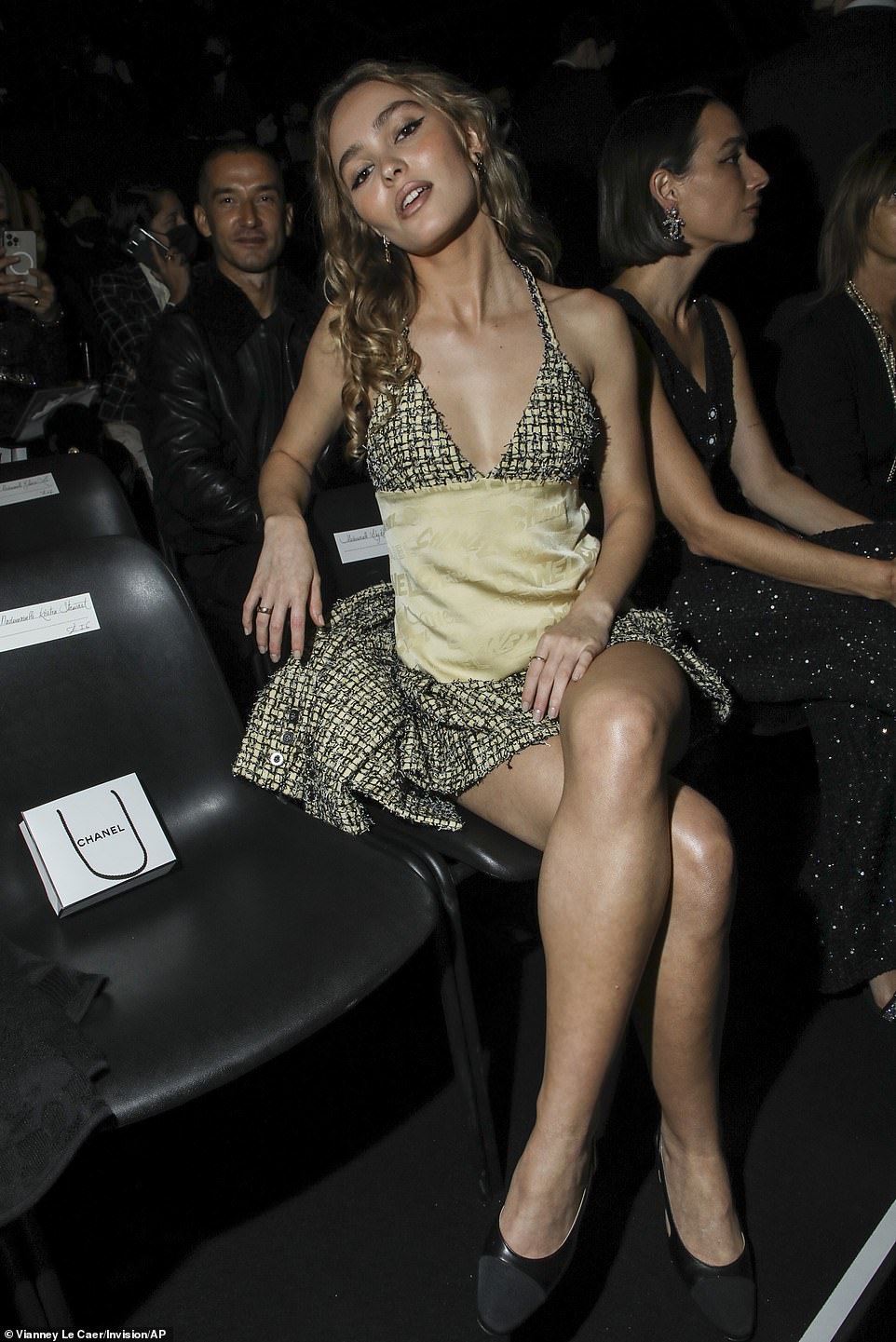 Standing out: Lily-Rose continued to pose up a storm as she proudly sat in the front row for the lavish fashion event 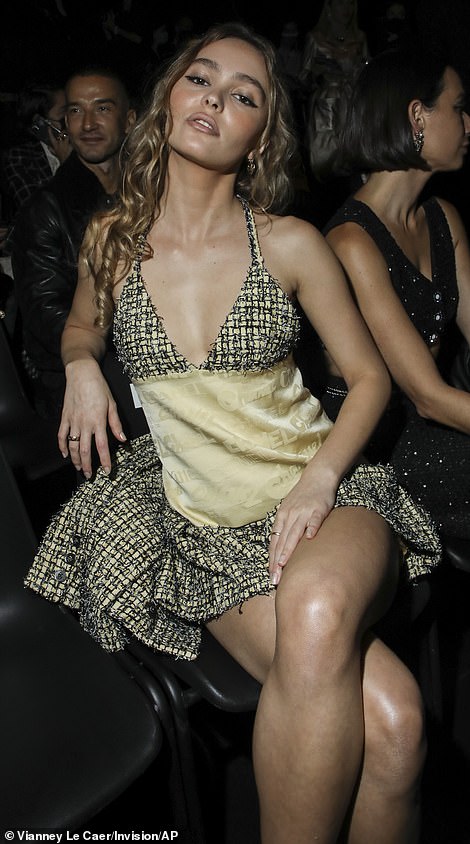 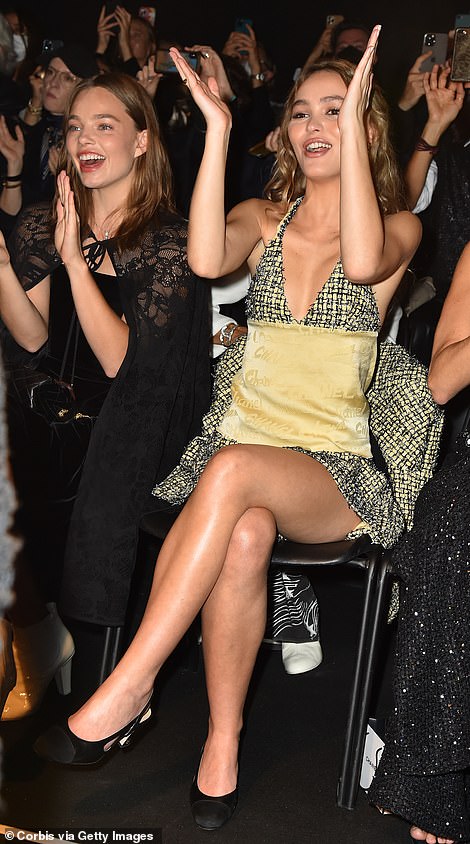 Looking good: The fashion favourite finished her look with her blonde tresses styled into loose ringlets as she posed in her seat during the fashion showcase

Meanwhile Kristen donned her own take on the classic Chanel suit, this time in pastel pink with a black trim.

Teaming the two-piece with a sheer lace bustier, socks and black loafers, the Spencer star pulled her strawberry blonde tresses into a simple up-do.

It comes after Lily-Rose crossed paths with ex-boyfriend Timothée Chalamet at the Met Gala in New York City two weeks ago. 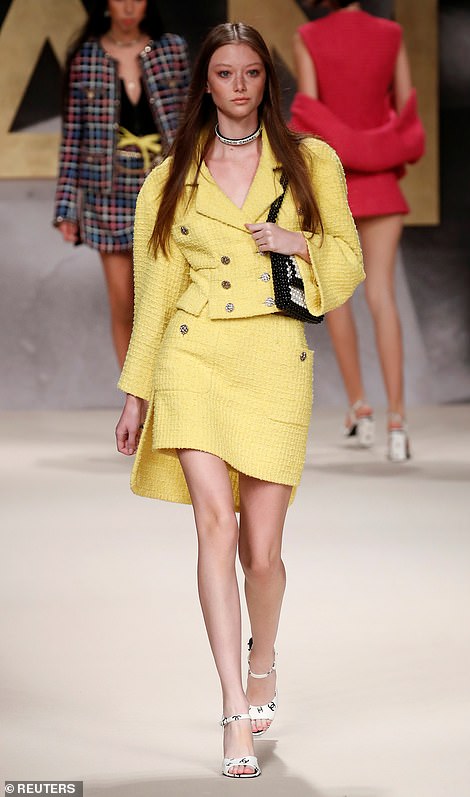 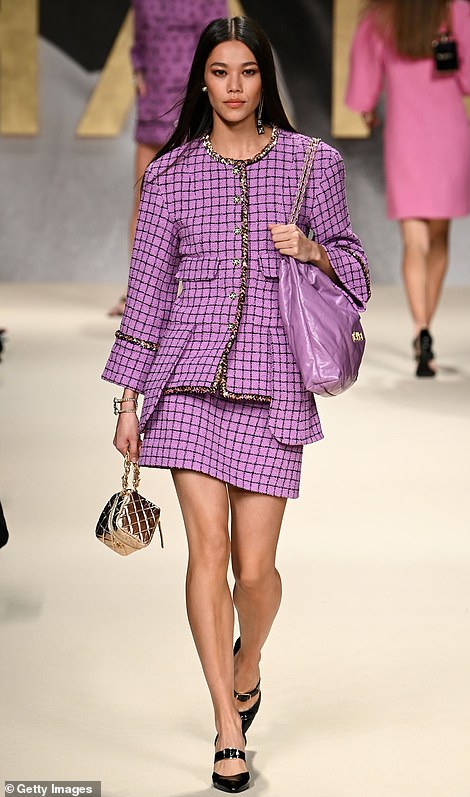 Transformed: The fashion show also saw takes on the famous Chanel suit, in a myriad of bold colours, with matching bags and heels as the models took to the runway 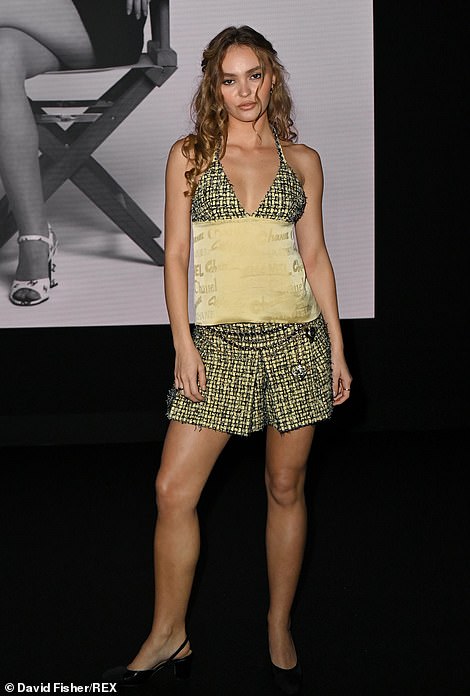 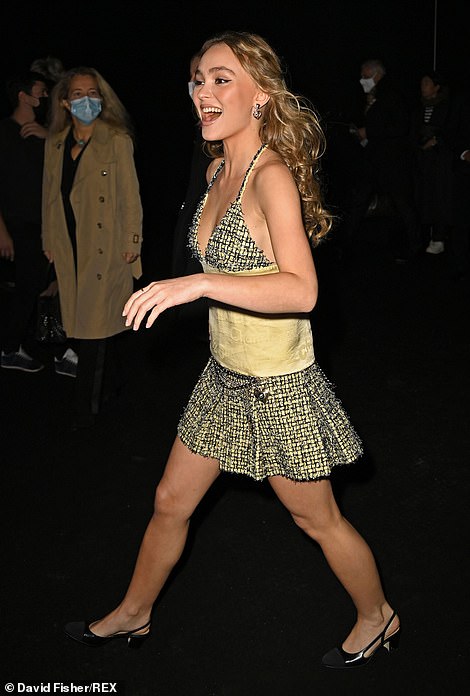 Show it off! Lily-Rose highlighted her slender figure in the form-fitting dress with a flared skirt and a plunging top as she arrived for the fashion show 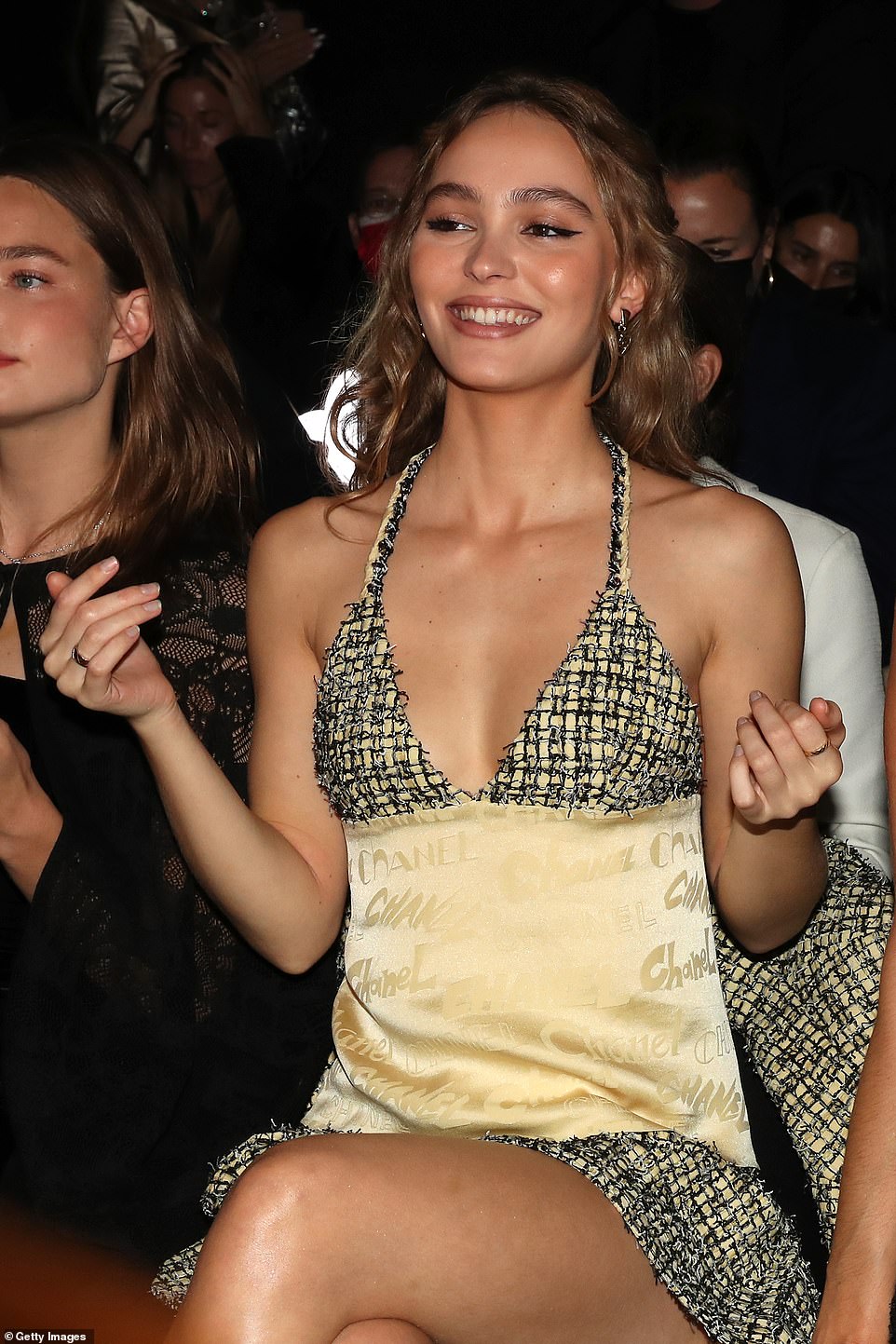 Loving it! Lily-Rose was in extremely high spirits as she took her place on the front row during the fashion showcase 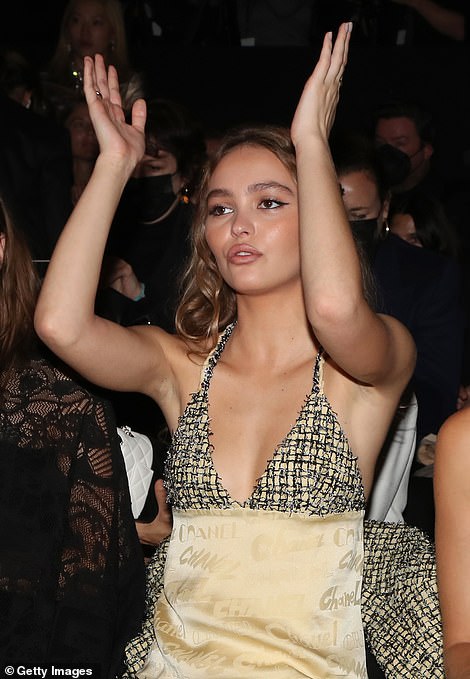 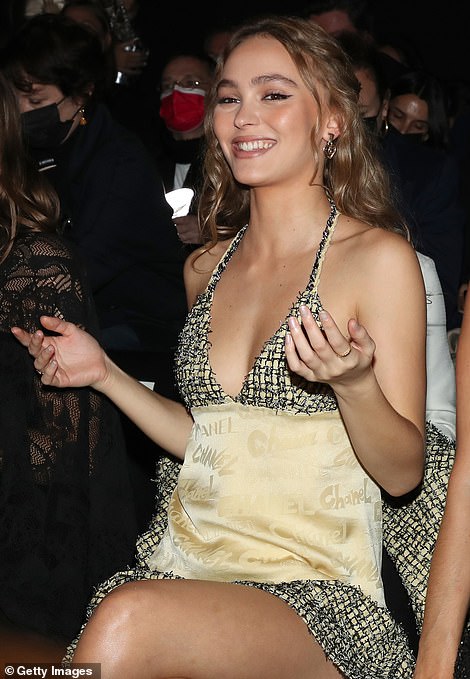 Flawless: The star clapped along as she took her place in the audience during the designer’s showcase of their Spring/Summer 2022 looks

The couple, whose year-long relationship ended in April 2020, were both in attendance at the star-studded gala, held annually at the Metropolitan Museum of Modern Art.

Despite confirming their split, the former couple were reportedly seen together in April 2021, during a shopping trip at Verameat in New York City’s East Village.

A source told Entertainment Tonight: ‘Timothée has come into the store several times, both with Lily and alone. While Lily was looking at something outside, he bought it quickly for her as a secret gift and then ran out.’ 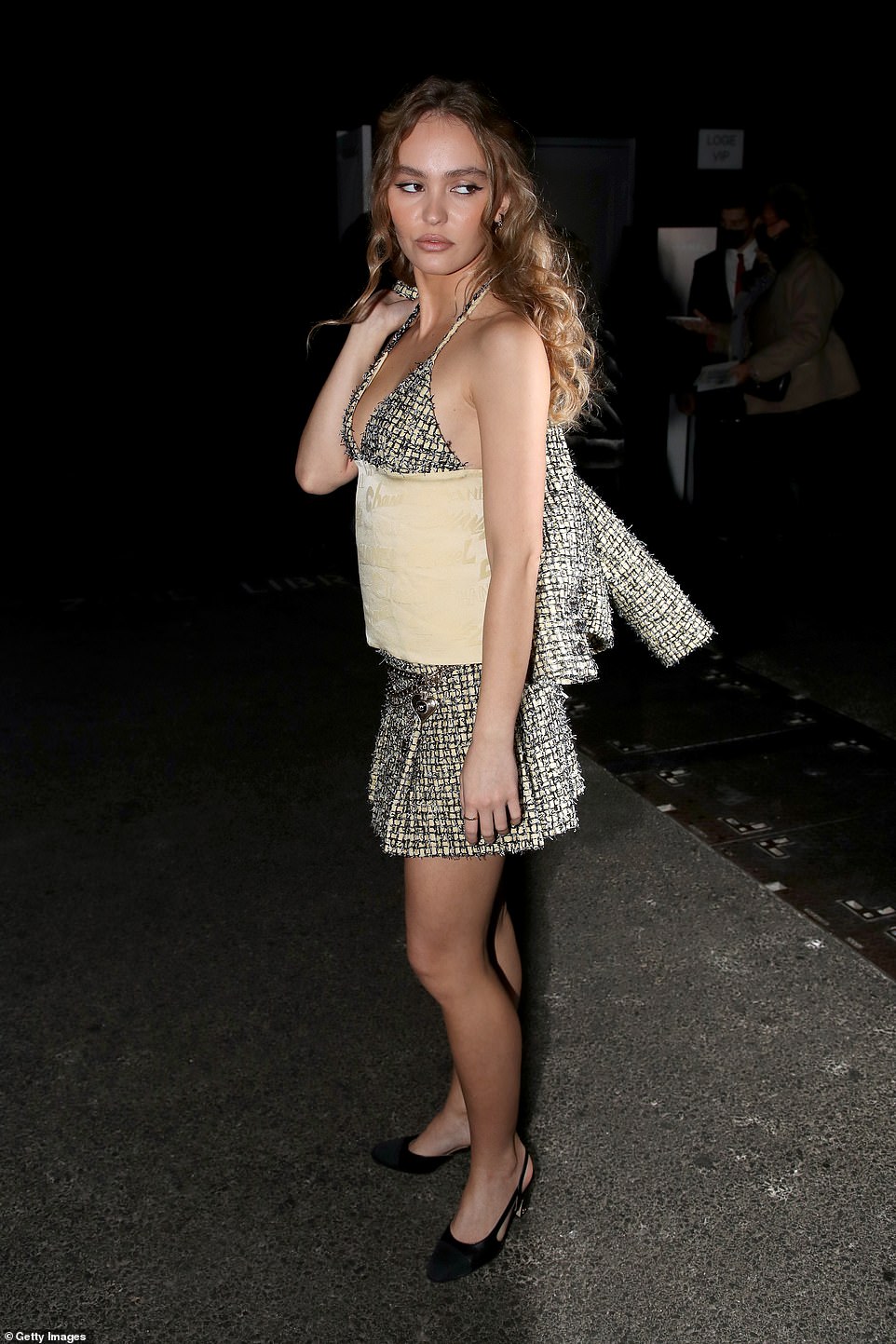 Departing: Lily-Rose aptly sported a matching tweed jacket to go alongside her dress as she made her way into the fashion show 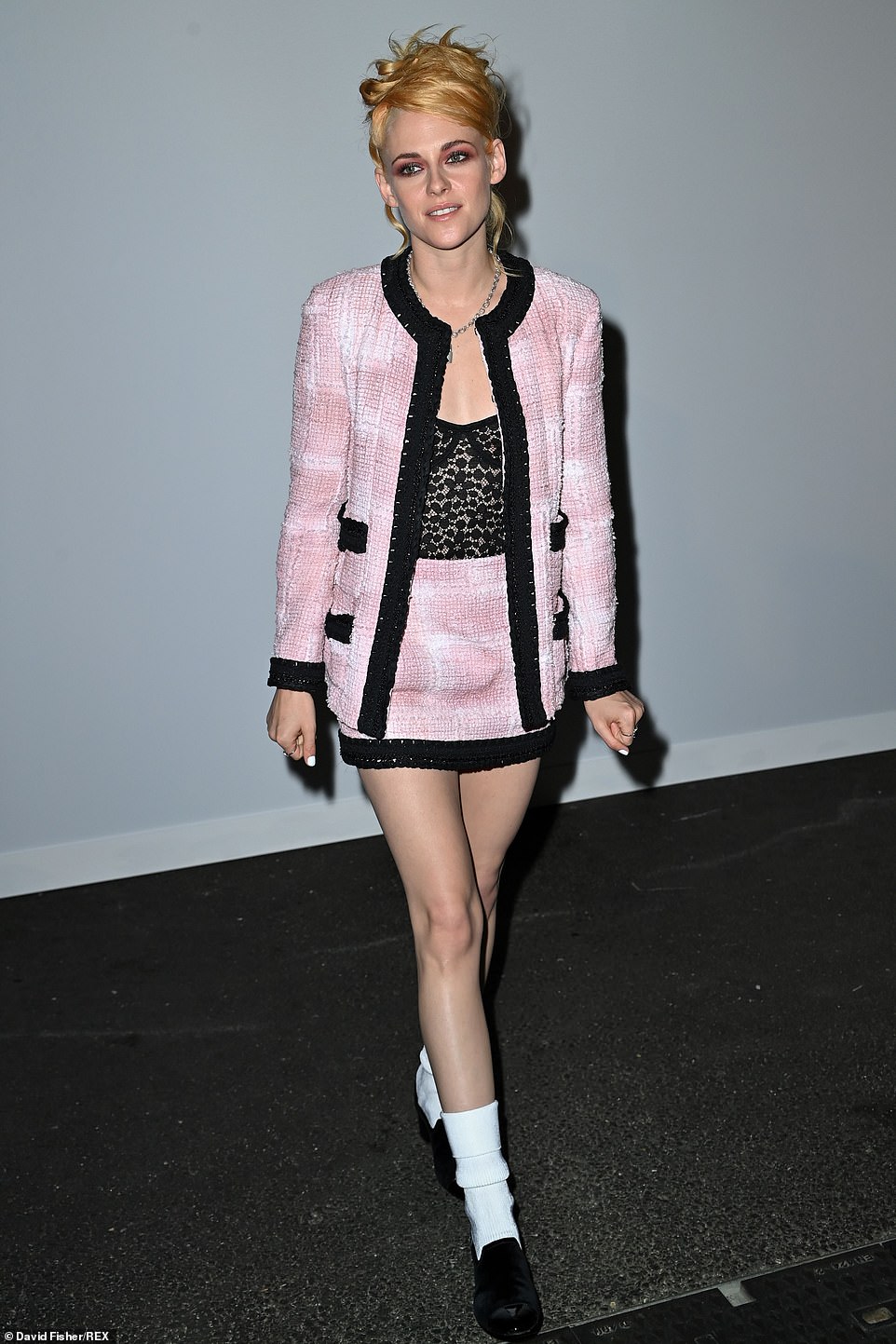 That’s a look! Meanwhile Kristen donned her own take on the classic Chanel suit, this time in pastel pink with a black trim 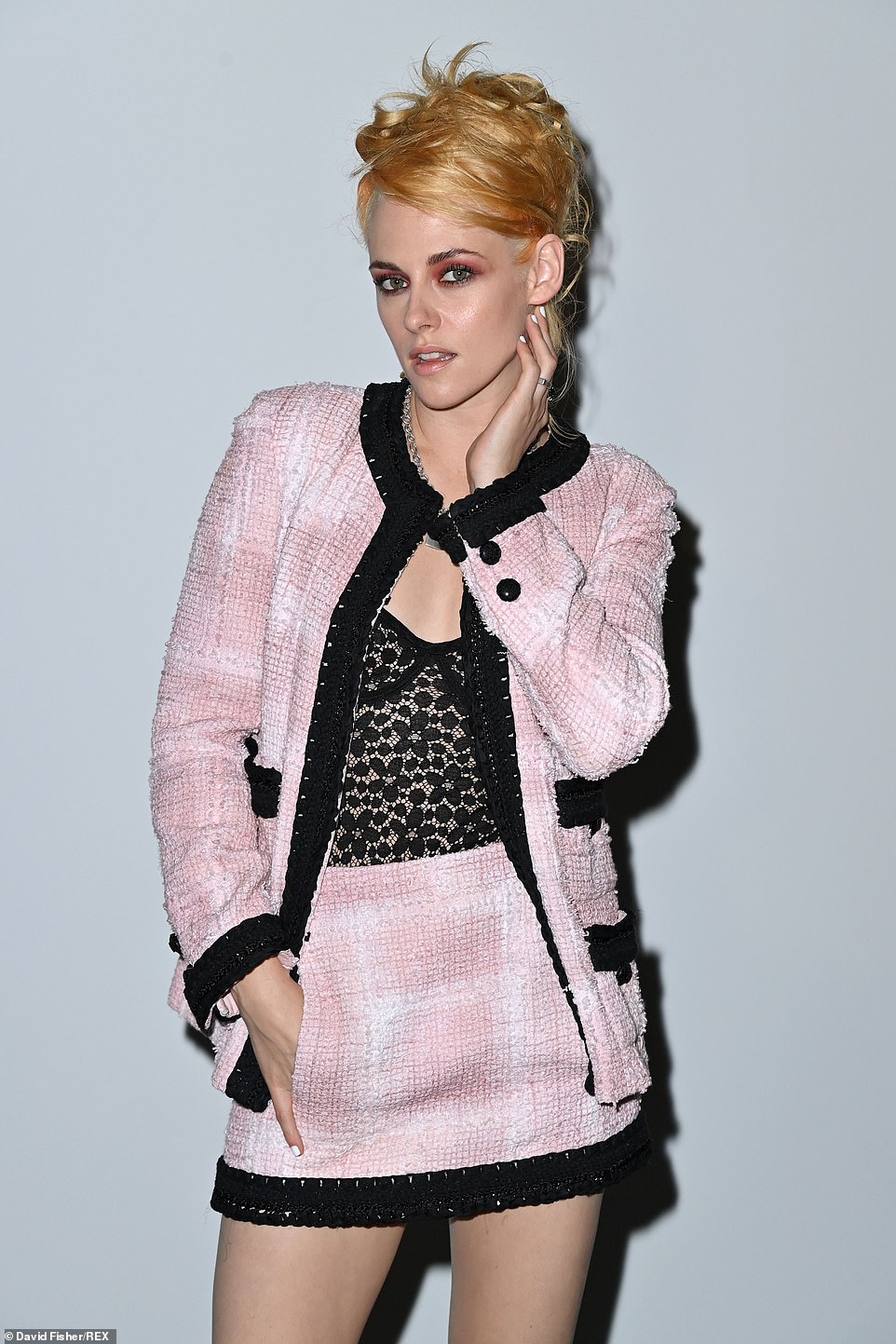 Bold: Teaming the two-piece with a sheer lace bustier, socks and black loafers, the Spencer star pulled her strawberry blonde tresses into a simple up-do

They were later seen making an exit from Timothée’s New York apartment building in June, sparking further claims of a reconciliation.

Meanwhile Timothée, 25, opted for a smart casual look, with the actor pairing a Haider Ackermann tuxedo jacket and sweatpants with Converse boots.

Fashion forward: Kristen, who is starring in the biopic Spencer as the late Princess Diana, was perfectly dressed for the Chanel event in her fun pale pink suit

Lily-Rose – the daughter of Hollywood star Johnny Depp and French singer Vanessa Paradis – enjoyed a year-long romance with Timothée before their separation was announced in 2020.

They first became romantically linked in October of 2018 as they were spotted kissing during several dinner dates in New York City. 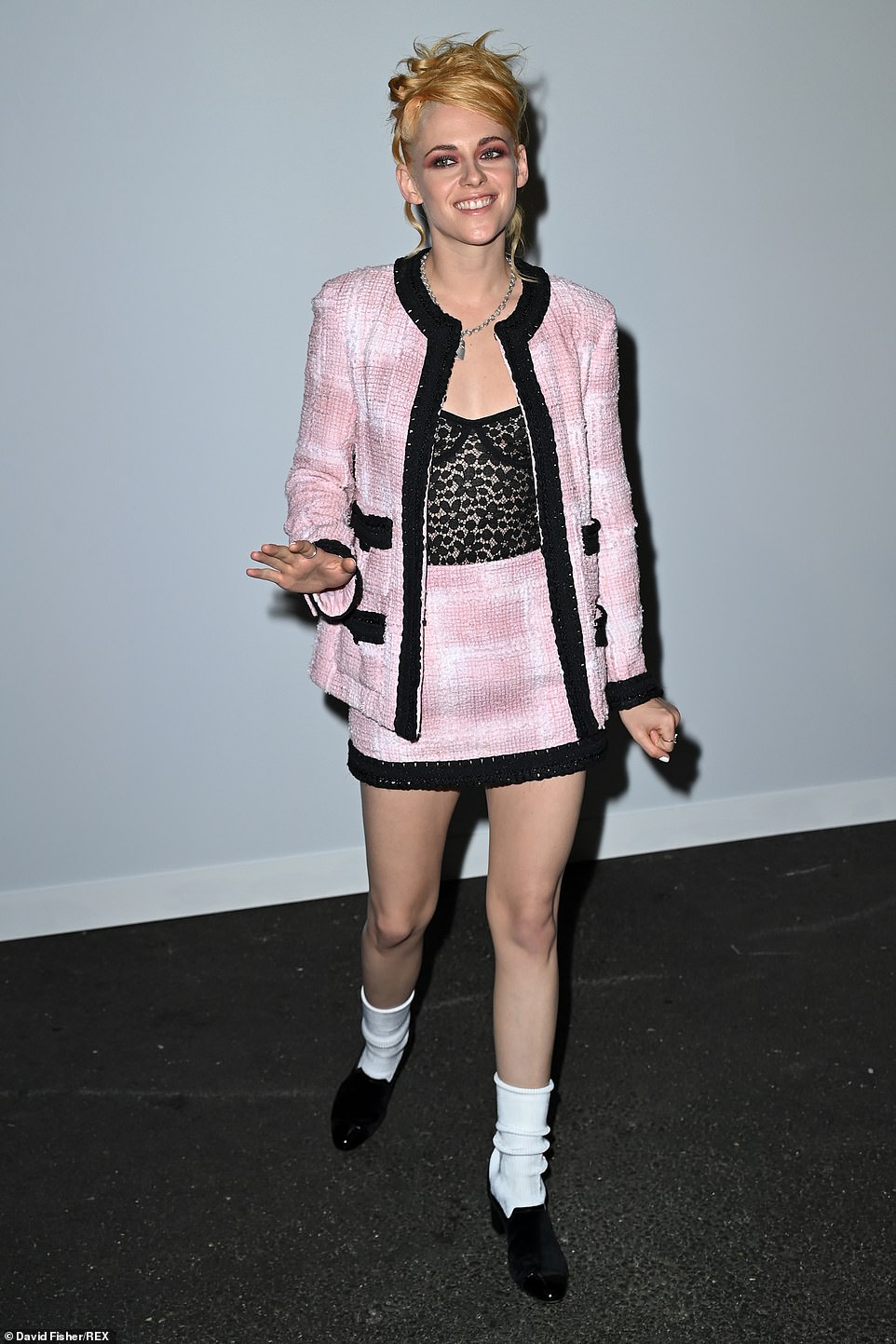 Bold: The star opted for the unusual fashion choice of teaming her suit with white ankle socks and flat black loafers 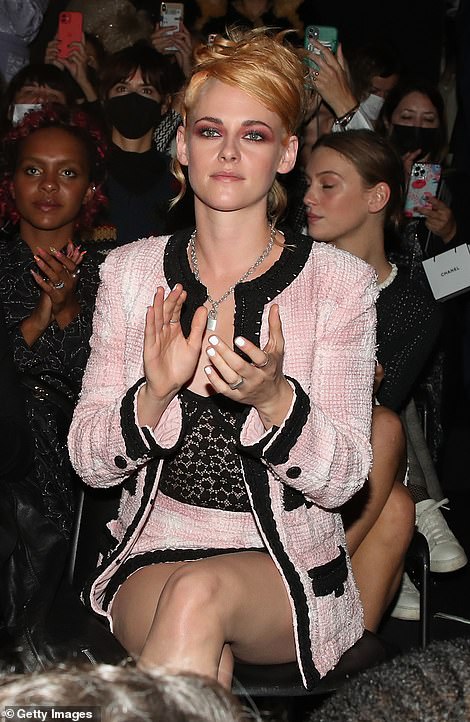 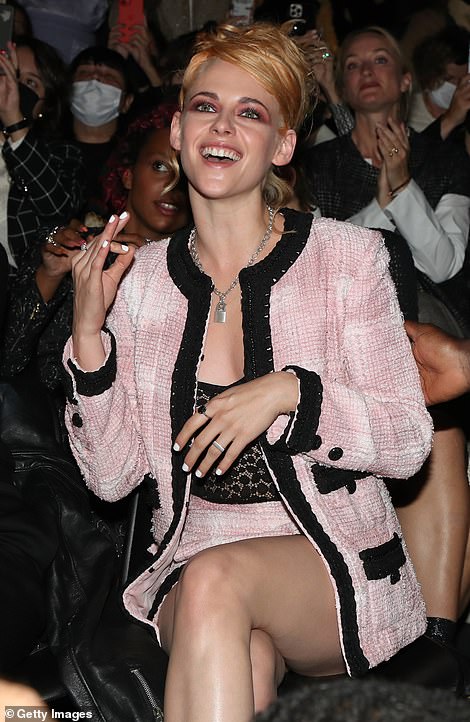 Playful: Taking her place on the front row, Kristen got into the spirit during the style showcase

She recently revealed that she fell asleep to videos and interviews of Princess Diana in order to prepare for her role as the royal, admitting she’s spent so much time studying her that she ‘can’t stop thinking about her’.

She also told how she can relate to some of Diana’s vulnerabilities including the downsides of fame and the struggle with other people’s perceptions, noting that she had ‘tasted’ a ‘high level’ of what she went through.

Discussing her portrayal of Diana – who died in a car accident in 1997 – Kristen spent hours analysing Diana’s accent and studying every part of her life, leading her gain a deep admiration and respect for the People’s Princess. 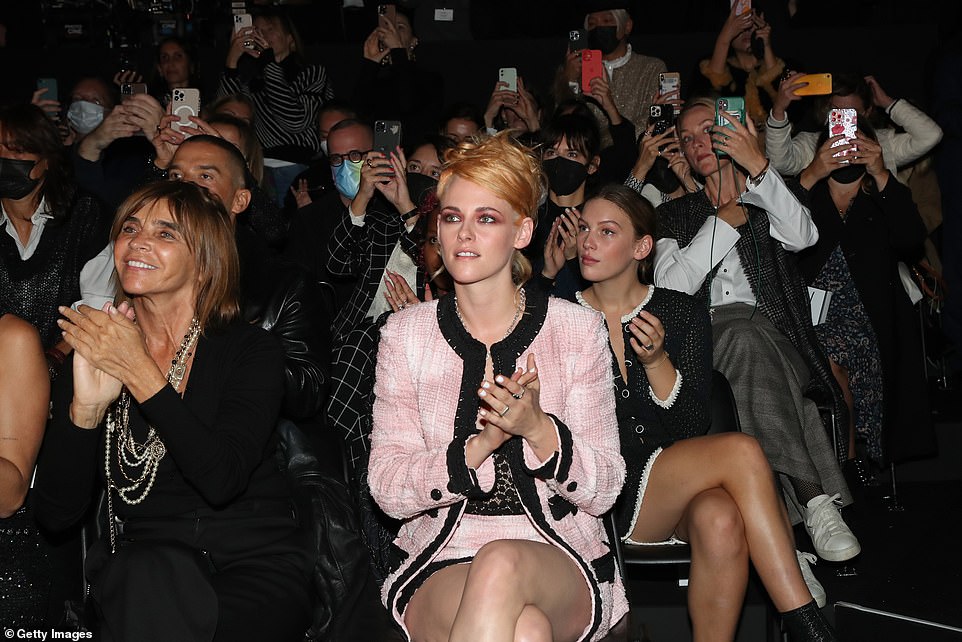 Taking her place: As ever the Chanel show, which took place on the final day of Paris Fashion Week, saw a huge crowd in attendance 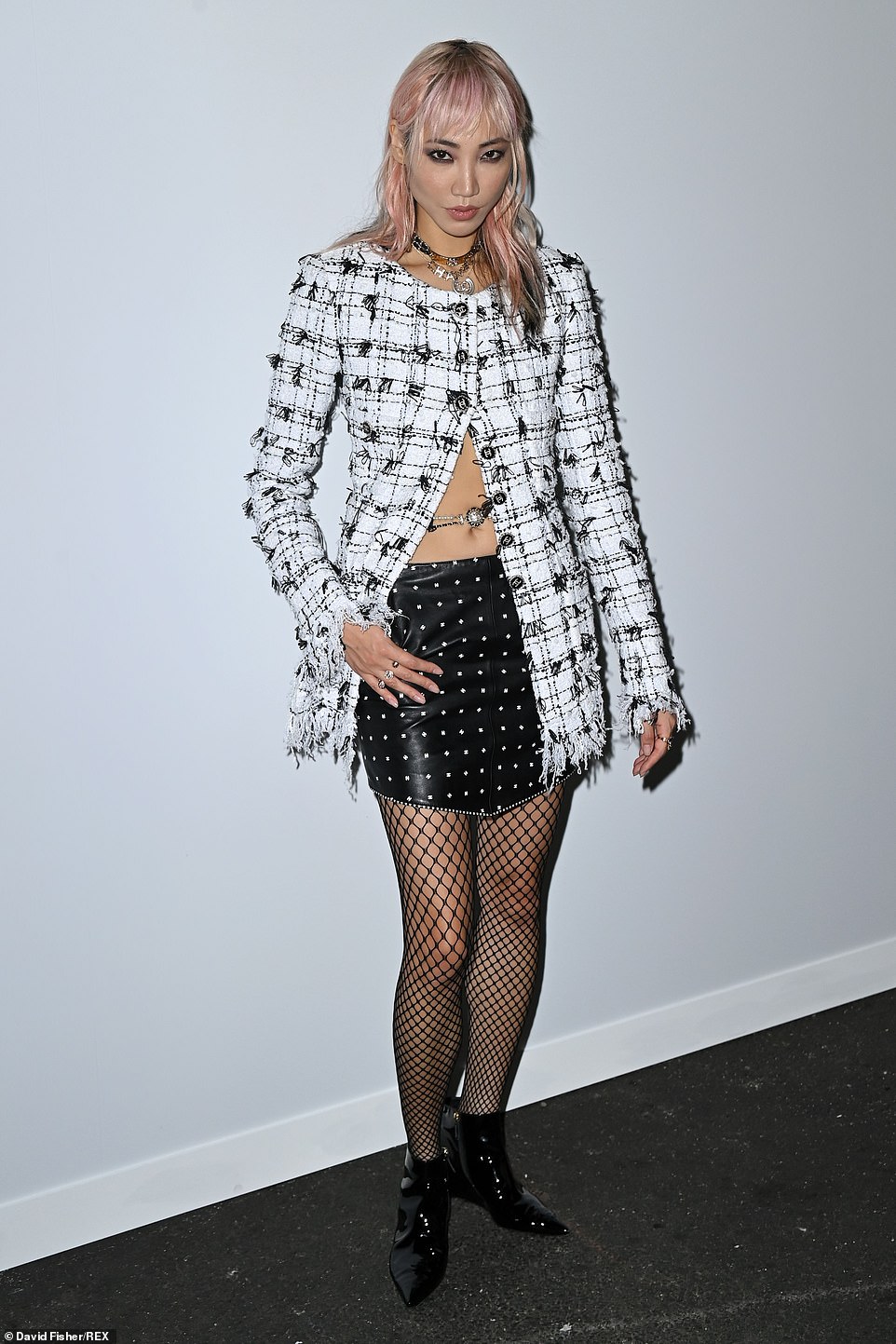 Revealing: Also in attendance for the event was model Soo Joo Park, who opted for her own take on Chanel’s famous ensemble

She told The Sun: ‘She means a lot to me, but it’s all relatively new because I’m from LA and didn’t grow up in England. Before this, she was not something that was at the forefront of my mind, because I lived so far away from it all. Now I can’t stop thinking about her.

‘I often wonder what she’d think about what’s going on in the world right now. To be honest, I’ve now consumed pretty much all there is to consume in terms of videos and interviews. I’ve watched everything that you could hear or see. I even go to sleep with it on.’

And it was through her extensive research that Kristen learned that she shares some of the same vulnerabilities as Diana amid the huge levels of fame they both experienced. 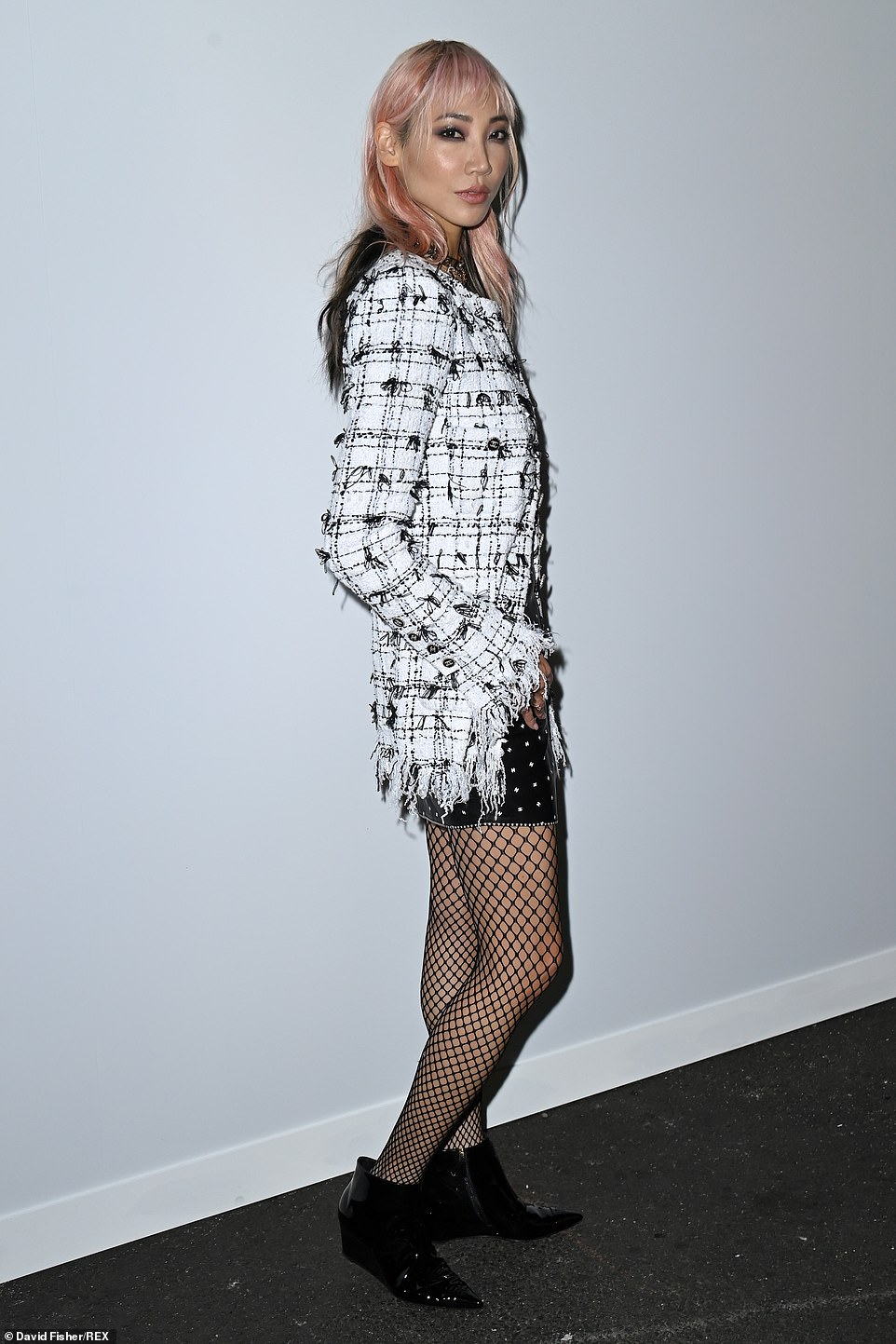 Suited and booted: She opted for the distressed black and white blazer teamed with studded shorts and patent ankle boots

Many Thanks To The following Website For This Valuable Content.
Lily-Rose Depp joins Kristen Stewart for the Chanel show at Paris Fashion Week – nonenglishfeed