Having shed three of the peloton’s top riders—Nairo Quintana, Richard Carapaz, and Mikel Landa—at the end of the 2019 cycling season, everyone’s favourite dysfunctional team returns to you-are-there video as Season 2 of “The Least Expected Day,” a very intimate portrait of Movistar, the World Tour professional cycling team that just can’t seem to get it together, streams worldwide on Netflix. And as the Covid-19 pandemic sweeps through the world, the team faces The Least Expected Year in 2020.

One of the most storied organizations in pro cycling, beginning as the Reynolds-Benotto team in 1980 and reaching glory as Banesto in the decade 1990-2000 and then as Caisse d’Epargne (with and without co-sponsor Ileas Balears) before taking on the Movistar sponsorship in 2011, Movistar and its predecessors have won 15 Grand Tours, numerous 1 week stage races, along with an impressive number of Classics and semi-classics (notably at the hands of the ageless Alejandro Valverde). The current number of wins as of this writing is 1,002. The team has boasted a galaxy of cycling stars over the years but big wins have proven more and more elusive, with the last major success being Richard Carapaz’s taking the pink jersey at the 2019 Giro d’Italia. Commentators have made jokes about Movistar’s goal at the Tour de France to be awarded recognition as the best team which, well, is something most teams can’t manage but clearly being on the podium in that way is not the same as being on the podium with one of the hallowed jerseys. 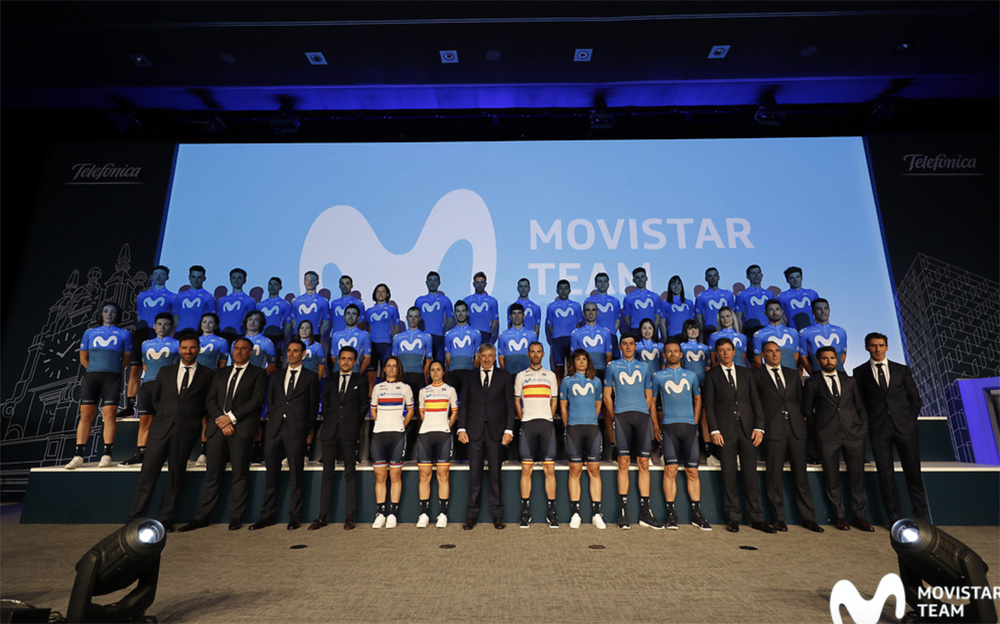 The Netflix series, which drew a wide audience in its first year, was again six episodes in the second, with the focus entirely on the three Grand Tours, along with team meetings in preparation and post-race analysis. Season 2 opens with “Death and Destruction,” and the pandemic-delayed Tour de France, which started at the end of August rather than in the traditional July. Stage 1is a bit of a disaster as slick road surfaces cause all kinds of crashes around Nice and one of the chief victims seems to be José Joaquín Rojas, a pro for 15 years, with 14 years of those on Movistar. The producers clearly wanted big personalities for the series and Rojas, who exhibits an alarming propensity to crash, is an engaging and entertaining presence. Alejandro Valverde is clearly a powerful factor in the team’s hierarchy, while younger riders Marc Soler and new boy Enric Mas are where the future seems to lead. As to staff, General Manager Eusebio Unzué is always an avuncular presence, while a number of the Directeur Sportives are pretty tense. Well, except for Chente García Acosta, a reliable domestique in the Indurain era, who has an uproarious sense of humour and is adored by the camera. 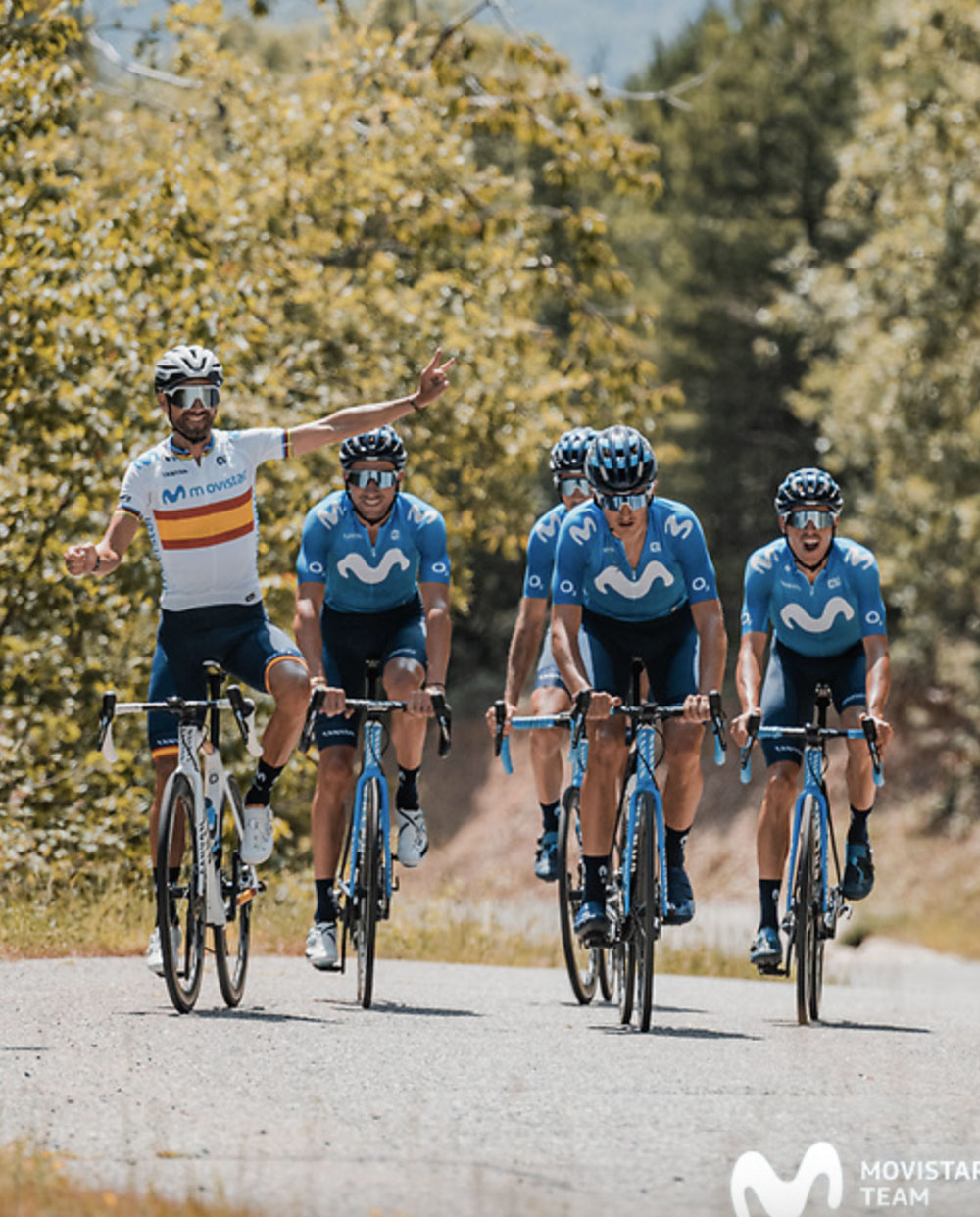 Considering the depth of experience in this team, its managers and riders, it is difficult to understand the lack of focus. Strategy meetings we see are oddly vague and this lack of direction is manifest at the Tour, where the team has decided to address the challenge posed by the Super Slovenians, Pogačar and Roglič, but a troika leadership. Valverde keeps his own counsel, Soler is often clearly confused about what his role should be (stage wins? GC?) while Mas is eager to show his mettle but his inexperience shows. Ultimately, Mas manages Movistar’s best showing, coming fifth oveall in the Tour, but the team was nearly invisible throughout the three weeks. Mixed results were to come with the overlapping Giro and Vuelta later in the season. 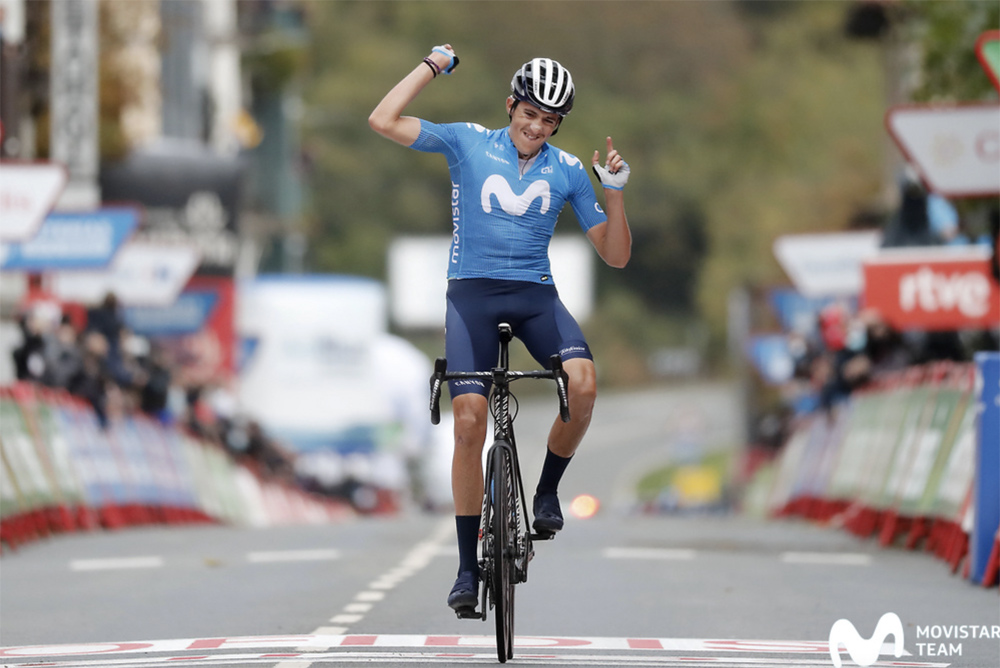 Given the team’s sponsorship, the Vuelta was clearly the more important of the two races and a team of neophytes goes to Italy. Best-placed in the GC at the end is Sergio Samitier in 13th place but the bright spot seems to be first year pro Einer Rubio, a tiny Colombian climber who injects some excitement into the race for Movistar. Things go better at the Vuelta, where Marc Soler wins Stage 2, Enric Mas comes fifth in the GC and takes the white Best Young Rider jersey at the end. Soler wins the combativity prize three times and Valverde once during the race and the team wins Best Team classification. But this is pretty thin for a team so impressive on paper. Spoiler Alert here! In 2020 the team crossed the finish line in front exactly, ah, twice: Soler’s stage win in the Vuelta and an early season race in Mallorca, again won by Soler, who has now departed for UAE Team Emirates. With the new system for the World Tour put in place for 2022, Movistar is currently only ahead of Bike Exchange and Cofidis in the relegation cut-off sweepstakes. 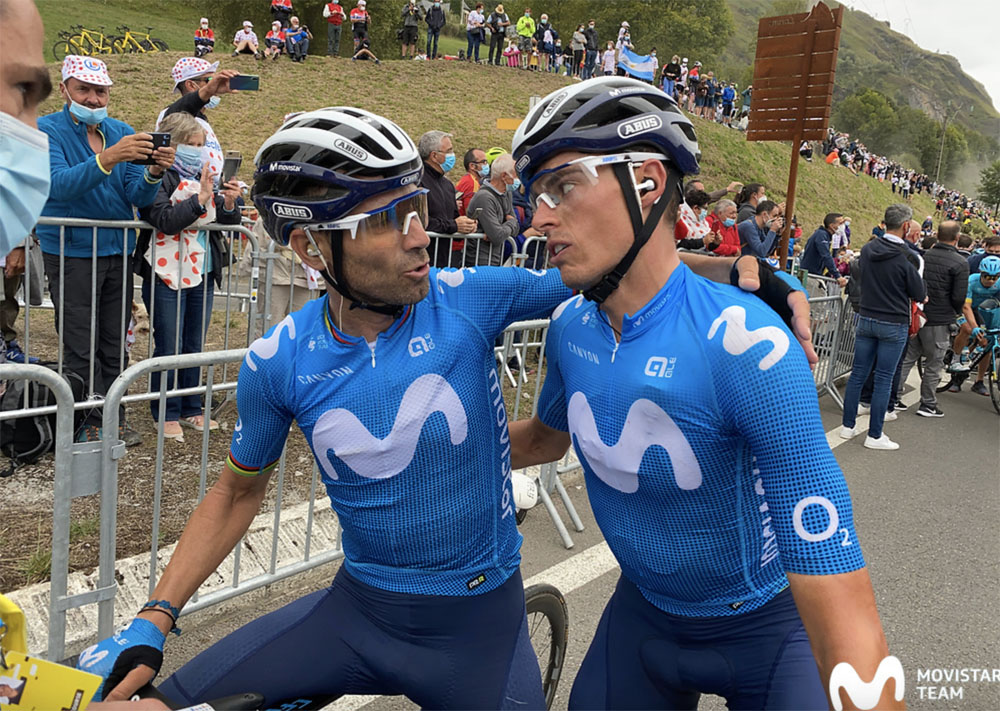 “The Least Expected Day” tells us a lot about professional bike racing. It is very hard to ride these races, let alone win them. It is hard to manage personalities in a team sport that focuses on individual winners. It is hard to come up with a successful strategy as everything constantly changes. There is evidence of people working hard for a common cause in a sport they all love. For a team that has been so successful in the past and that has been able to raise up talents like Nairo Quintana and Richard Carapaz, there are clearly elements that work but, as one ex-team member has noted, is Movistar more interested in making a compelling video series than in winning races? That rider is going to feature in Season 3 and, oh boy, it will be juicy. 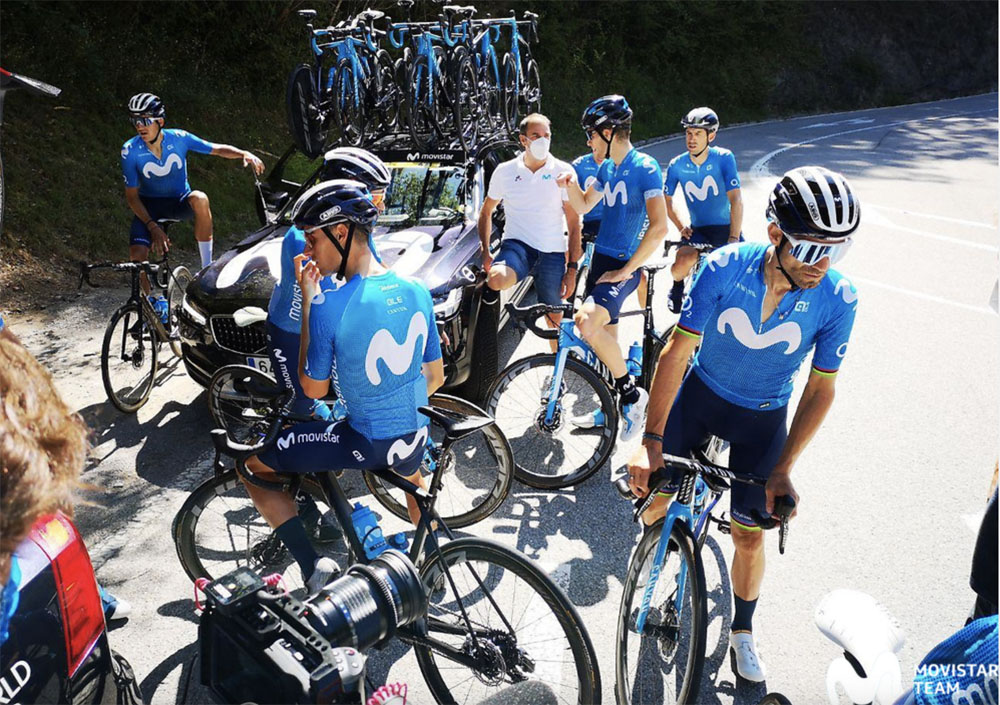 Casey Stengel, the manager of professional baseball’s worst team in the modern era, the 1962 New York Mets, is reputed to have shouted at his players: “Can’t anybody here play this game?” and from time to time one wonders about Movistar. But there are moments when you can see some shine and in the second series there is even a segment devoted to the Movistar women’s team, which began in 2018. They had only a single win in 2020 but everyone seemed to be a lot happier than on the men’s team! 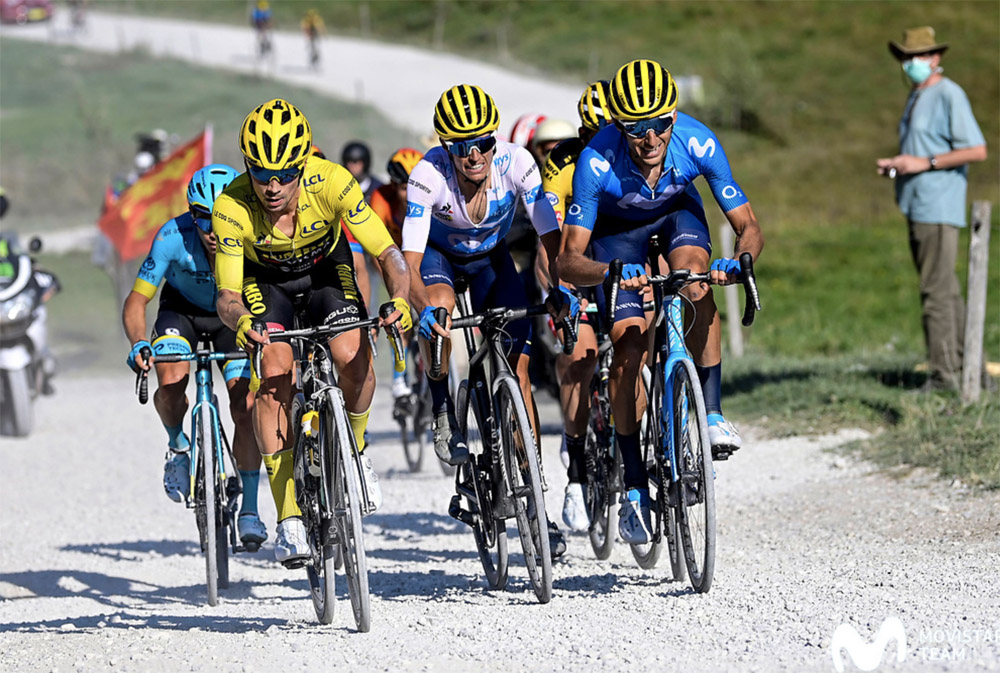 “The Least Expected Day” has been so successful that Netflix has proposed a series covering the entire World Tour, similar to the series on Formula 1 motor racing, “Drive to Survive.” Some team managers, particularly Patrick Lefevere of Quick-Step Alpha Vinyl, are enthusiastic and see this a way to bring a perhaps too-traditional sport to a modern audience, while others are cooler to the idea. “The Least Expected Day” is definitely good entertainment, even for those not immersed in the minutiae of pro bike racing, and the expanded look at the sport, which is now confirmed, could be a breakthrough. 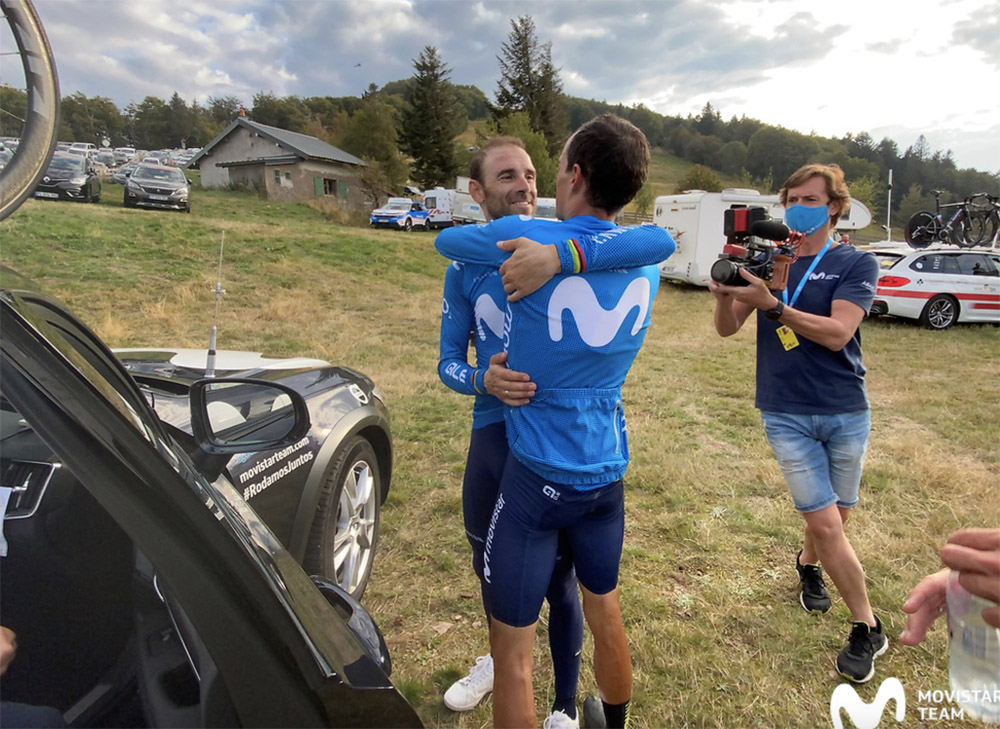 “The Least Expected Day, Season 2” is streaming on Netflix currently and consists of six episodes, each under 30 minutes, in Spanish with subtitles available. 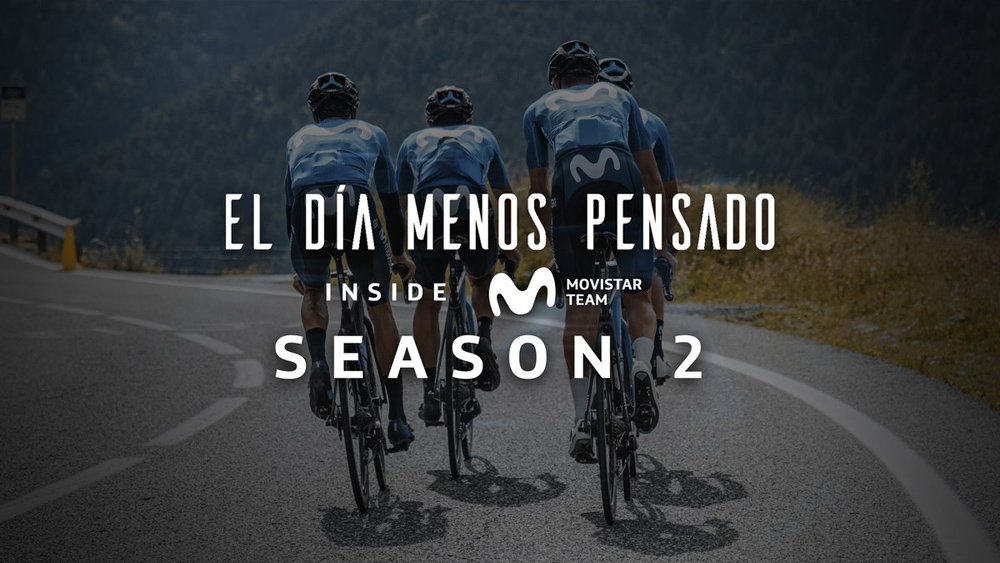 Like PEZ? Why not subscribe to our weekly newsletter to receive updates and reminders on what’s cool in road cycling?