‘Bajocero’, ‘Fragmentos de mujer’ and ‘La excavación’ stand out among the novelties that will be available on the platform next month.

Surely you have already booked the new Netflix series that you are going to see next January. Now you have to choose which are the films that are incorporated into the platform that you do not want to miss in the first month of 2021. The Spanish ‘thriller’, Bajocero; the dramas Fragments of a woman, The excavation and Tigre blanco are some of the original feature films released by the streaming giant over the next 30 days.

The platform also incorporates well-known films such as La sombra del diablo, Rocketman and Gru 3: My favorite villain; and original documentaries like The Minimalists: Less is Now, Crack: Cocaine, corruption and conspiracy and Tony Parker – The Last Basket.

Next, we leave you the complete list with movies premiering on Netflix in January 2021.

DO NOT STOP SEEING: ‘BAJOCERO’

Javier Gutiérrez and Karra Elejalde lead the cast of Bajocero, Netflix’s new original Spanish fiction. Directed by Lluís Quílez, the film tells how Martín, the policeman who drives a van with prisoners, tries to survive, after suffering a brutal assault, in the middle of a little-traveled road. As the inmates try to end his life, someone mysterious looks for a way to take one of the prisoners who were traveling in the convoy.

‘The Minimalists: Less is Now’

One of the new documentaries that Netflix premieres in January is The Minimalists: Less is Now. Joshua Fields Millburn and Ryan Nicodemus explain and demonstrate how it is possible to lead a better life without having to be surrounded by innumerable material goods.

Borning: Asphalt on Fire, the third installment of the Norwegian action comedy, is another of the novelties that will land on the platform next month. Roy (Anders Baasmo Christiansen) is about to get married, but when his girlfriend plants him minutes before the wedding. To try to get her partner back, a friend encourages her to participate in a car race in Germany. However, it will not be easy, because on his way he must face many obstacles.

One of the new documentaries released by the streaming giant next January is Tony Parker – The Last Basket. In it, it is narrated how Tony Parker went on to become the best basketball player in France.

Fragments of a woman

Conductor powder Kornél Mundruczó, Fragments of a woman is another of the original films that Netflix premieres in January 2021. The story stars Martha (Vanessa Kirby) and Sean (Shia LaBeouf), a couple who loses their baby, in childbirth. As a result of this dramatic event, Martha, devastated, must learn to live with her mother and Sean, with whom the relationship becomes unbearable.

Aziz’s dilemma is another of the cinephile novelties that is incorporated into the platform’s catalog. The plot follows Aziz, a middle-aged man, who in the midst of an existential crisis, tries to pretend that he has everything under control: his work, his family and his relationship with his friends.

Another of the documentaries that the platform will premiere next month is Crack: Cocaine, corruption and conspiracy. A documentary about the origin of crack, and how his entry into society in the 80s, was a drama among the most marginal populations of the United States.

Father in duplicate is the title of another of the original feature films coming to Netflix next January. The tape follows a young woman, who has always lived in a hippie commune, determined to find her biological father, taking advantage of a trip from his mother.

Anthony Mackie is the protagonist of Uncovered, the original sci-fi film coming to Netflix next month. Directed by Mikael Hafstrom, the feature film takes us to the near future, where a drone pilot (Damson Idris) must join forces with an android (Mackie), to search for a device that could end life on the planet.

White Tiger It is the title of another of the feature films that Netflix will premiere next month. Inspired by Aravind Adiga’s ‘best-seller’, and starring Adarsh ​​Gourav, Rajkummar Rao and Priyanka Chopra, the film tells the story of Balram, a man who starts working for a millionaire couple, who has just returned from the United States to India. Although his destiny was to be a servant all his life, after witnessing a series of events, rebels to achieve his dreams.

January is also the month chosen by the streaming giant to premiere The excavation, the drama starring Carey Mulligan, Ralph Fiennes and Lily James. Based on the novel by John Preston The Dig, the film tells the story of a wealthy widow, who hires an archaeologist to excavate some graves found on her property. Some tombs in which they find a historical discovery that will change their life forever.

Starring Brad Pitt and Harrison Ford, The devil’s shadow It is one of the tapes that joins the catalog of the platform. The film follows Frankie McGuire (Pitt), a member of the IRA, who travels to the United States to buy a shipment of weapons. Upon arrival, he meets Tom (Ford), a New York policeman, who offers him accommodation in his house. The problem comes when Tom discovers Frankie’s true identity.. 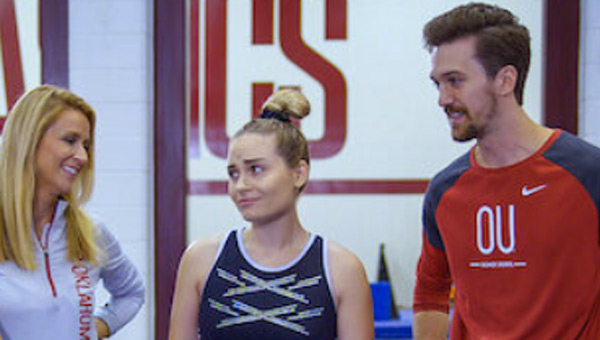 Full Out 2: You Got This!, the sequel to the Netflix film, will be available from next January. The film follows the rhythmic gymnastics team at the University of Oklahoma, which just lost its star gymnast, as a result of an injury. To try to give a new air to their numbers, they hire a young ‘break dance’ dancer.

William Wyler’s movie, Funny Girl, is another novelty that lands on Netflix in January 2021. Starring Barbra Streisand, this ‘biopic’ tells the story of Fanny Brice, the well-known singer of the early twentieth century, who triumphed in the musical Follies. Her life takes a turn when she begins dating Nick Arnstein, a man addicted to gambling.

Miss Bala It also joins the giant’s extensive catalog next January. The film, directed by Gerardo Naranjo, follows Laura (Stephanie Sigman), a young Mexican woman who dreams of winning a beauty pageant to be able to leave her country, and succeed in life. However, when she starts working for a network of exploitation of women and drug trafficking, she begins to realize that her plans are not going to turn out as she had imagined.

Alex Kurtzman is the director of The Mummy, the film starring Tom Cruise and Sofia Boutella, which you can also enjoy on the platform. The story begins when Ahmanet (Boutella), an ancient Egyptian princess, awakens in her crypt. Betrayed by her father, who promised that he would become pharaoh, she is resurrected in today’s world where she causes chaos in search of revenge. Nick Morton (Cruise) will have it in his hand to control Ahmanet’s anger to save the world.

Vince Vaughn and Don Johnson lead the cast of Brawl in Cell Block 99, the drama that hits the platform next January. The film tells the story of Bradley (Vaughn), a former boxer who to try to get some money he enters the drug trafficking business. When he is involved in a shootout with the police, he is sentenced to prison. Once inside the jail, his enemies force him to commit a series of acts of vandalism that turn the penitentiary into a battlefield.

Rocketman is another of the novelties that will be added to the platform’s catalog next January. Taron Egerton, Jamie Bell and Richard Madden lead the cast of the ‘biopic’ on the life of Elton John, directed by Dexter Fletcher. On the tape, it tells the life of the well-known composer, from his childhood, when he was already a prodigy on the piano, until he became a world music star.

Adam Robitel’s film, Escape Room, is another one that you can find in the platform’s catalog from January 2021. The story follows six individuals who receive a letter, which promises to improve their routine life. When the chosen ones go to their appointment, they discover that to get what they had been promised, they must compete in an escape room game. Now there is no going back and they must try to solve a series of tests to get out of there alive..

For the smallest of the house, it joins the catalog of the platform Group 3: Despicable Me. The story of this third installment of the animation franchise, directed by Pierre Coffin, Kyle Balda and Eric Guillon, begins with the firing of Gru from the Anti-Villain League, when he lets the evil Balthazar Bratt escape. While trying to find a way to catch him on his own, with the help of his wife Lucy, his twin brother Dru crosses his path, who does his best to convince Gru to return to being the villain he once was.

Many Thanks To The following Website For This Valuable Content.
Netflix Releases: All Movies Coming In January 2021 – Movie News