Trans students are not safe from transphobia at ASU, even in minor forms, and it shouldn’t be our responsibility to stop it 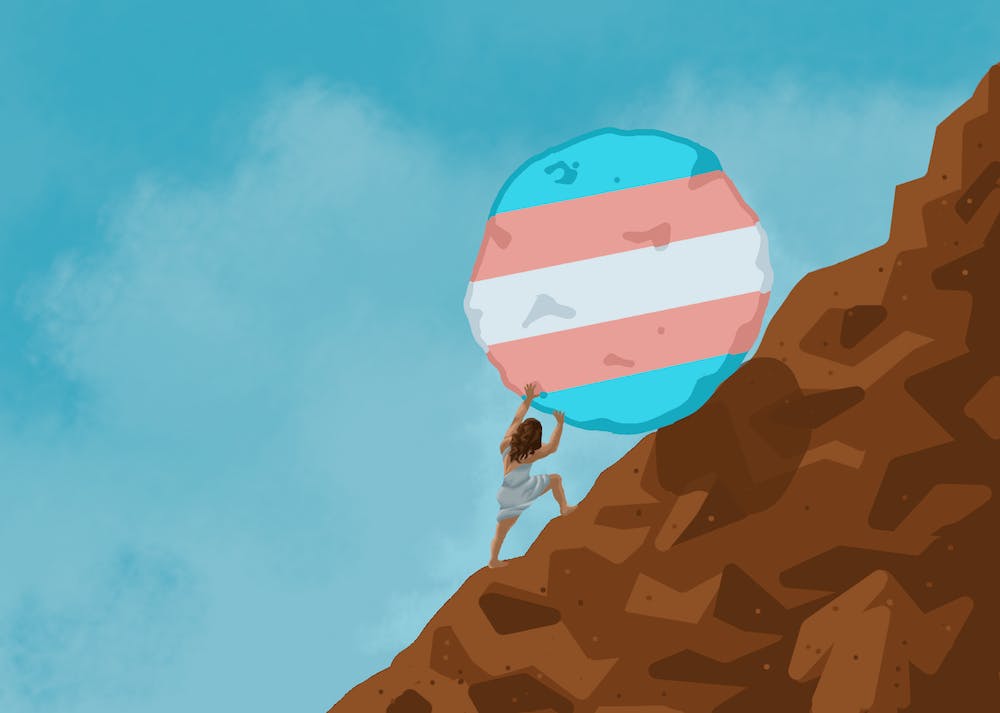 Trans students often feel like they are fighting an uphill battle when it comes to respect. Illustration originally published Thursday, Sept. 9, 2021.

Transgender students have been taught that it is their responsibility to seek out a safe space to express themselves. If there isn’t a safe space, they have to create one, or worse: hide the fact that they are trans. I am nonbinary and I use they/them pronouns. That should be all you need to know to respect my identity.

According to ASU Student and Cultural Engagement, “It is your responsibility to communicate in an email your asserted, or preferred, name and pronouns to your instructor or supervisor.” This forces trans students to take responsibility for creating a space in which their identities are respected upon themselves, rather than ASU.

I have no problem communicating the fact that I use they/them pronouns passively, but when I have to confront professors and students on my proper pronouns, I am actively opening myself up to transphobia.

When I informed my professors this semester of my pronouns I was treated with respect or indifference, and in my first month at ASU I have been misgendered by at least three of my professors, even after informing them of my identity.

While it may have been accidental, they were accidents that made me feel unsafe in the classroom, and I don’t feel like I can correct my professors out of fear of being a distraction, seen as unreasonable, or opening myself up to transphobia. Trying your best isn’t what I’m asking you for — I’m telling you my pronouns and how you will refer to me.

“Only about half of the time have professors been pretty understanding of pronouns,” said Kai Graham, a trans senior studying psychology.

Trans students aren’t allowed to make demands about their pronouns, it is always a request. “Asking” that you call me by my name or use my pronouns relegates me to a vulnerable position, telling me that I am an obstruction and that I must accept any possible transphobia that comes with being trans.

I introduce myself with pronouns and also wear a pronoun pin everyday to class, and I still frequently get misgendered in front of everyone by the professor and/or other classmates during presentations and such. It’s very disheartening. It took a A LOT of guts for me to…

“If a professor doesn’t understand my pronouns or misgenders me, I can’t speak on that, because I don’t want to put a spotlight on me in front of 200 people,” said Charlie Murillo, a trans freshman studying psychology.

This exposes a deeper issue of internalized transphobia — when one imposes cisnormative rules onto themselves, resulting in accepting lower standards for how one should be treated.

I default to masculinity because I don’t think I am worthy of being recognized as trans. I accept being referred to as he/him or as a boy because I think that being trans is an obstruction to the cisnormative imperative. I don’t mean to reduce the part of me that is trans. It’s instinctual, a survival mechanism.

It feels like it would be easier for everyone else to forgo being my authentic self, even if that results in self-inflicted psychological terror.

According to a review published in the Journal of Adolescent Health, trans youth have much higher rates of mental health issues than their cisgender peers. This can be attributed to internalized transphobia, marginalization, discrimination and isolation.

A report published in Cognitive and Behavioral Practice found institutional efforts to reduce discrimination are associated with decreased rates of psychological distress. Individual intervention by clinicians and teachers can result in system-wide changes to how trans students are treated.

My solution to pronoun-based transphobia in the classroom is simple: all professors should be educated on transgender students and transphobia. According to the CBP report, simply being educated on what trans students go through and what transphobia entails results in less transphobic discrimination.

Murillo agreed ASU should consider a small course for staff and faculty, and said it could solve some issues he faces. “While my professor does try his best, he tends to gender people based on voice or appearance,” he said.

According to the Office of Diversity, Equity and Inclusion website, all staff, faculty and student workers are required to complete harassment and discrimination and Title IX duty to report trainings. Other facilitated trainings offered include ones on diversity in the workplace and microaggressions and implicit bias, but they are not required.

The Office of Diversity, Equity and Inclusion didn’t respond to request for comment on whether there are other required trainings. If sensitivity training is already required for ASU staff in order to educate professors on trans students, there is always room from improvement, which could involve consultation from trans students and faculty.

Using gender-neutral pronouns like they/them is not only grammatically correct but reduces the chance that you misgender someone. If someone doesn’t like being referred to with they/them pronouns, it allows more safe grounds for clarifying what one’s pronouns are.

Additionally, instructors should create an environment in which correcting instances of misgendering is normalized and encouraged and should start class introductions with their own pronouns.

Doing so can help trans students feel safer because it normalizes pronoun clarification and puts the responsibility on cisgender people to create a safe space for trans people.

It is the responsibility of any educator to create a safe space for their students. It is not my responsibility to educate professors on my identity, nor should I have to scream from the rooftops in order to be respected.

If any of these policies is implemented, it is a win for trans students. Trans students ought not to be responsible to expose themselves to transphobia in order to be respected. My pronouns are they/them, and I am nonbinary. You should respect my identity because of that statement alone.

Editor’s note: The opinions presented in this column are the author’s and do not imply any endorsement from The State Press or its editors.

Want to join the conversation? Send an email to opiniondesk.statepress@gmail.com. Keep letters under 500 words and be sure to include your university affiliation. Anonymity will not be granted.

Many Thanks To The following Website For This Valuable Content.
Opinion: It is not trans students’ responsibility to demand respect