May begins and new series arrive. Syfy brings us a sci-fi series starring Josh Holloway and Sarah Wayne Callies, centered on a dystopian world in which the city of Los Angeles is being controlled by an invading alien group. ‘Colony’, this new release from Syfy Spain, manages to mix our current situation, and our fears, with a science fiction component.

During the presentation tour of the series held a few weeks ago, we were able to speak with the protagonist of this series, Sarah Wayne Callies. This is what he told us.

eCartelera: If we look back and compare Katie with Sara from ‘Prison Break’ and Lori from ‘The Walking Dead’, we see that Katie is more of a fighter. We find a stronger female character.

Sarah Wayne Callies: What I liked about the character is that she is a very complete woman, she has a universe that exists without depending on a male character, without her husband. She makes ethical decisions, based solely on her beliefs, and that for me is very exciting. Anyway, I don’t think of Katie as a strong woman either, she’s just a woman, we’re all strong. What makes Katie different is that she is a woman, she is a character, she exists on her own. Many times we see in the series, or the cinema, the female protagonists who exist solely to help or guide a male character.

eCartelera: In the series we are shown a wall, a society, very similar to reality, to things that are happening and about which they are talking. Was this one of the aspects that most caught your attention?

SWC: I have always liked science fiction. I’ve always watched a lot of science fiction. I was born the year ‘Star Wars’ was released I think, I was watching ‘Star Trek’ with my father and I’m a big fan of ‘Battlestar Galactica’. What I like the most about this genre is that it allows us to explore reality, as you say, through that halo of fiction. It allows to touch very contemporary subjects but using aliens and spaceships, which makes it not perceived as a threat. We live in a time when the US president wants to build a wall, and the series allows us to talk about these issues, political issues, which can be sensitive or complex. 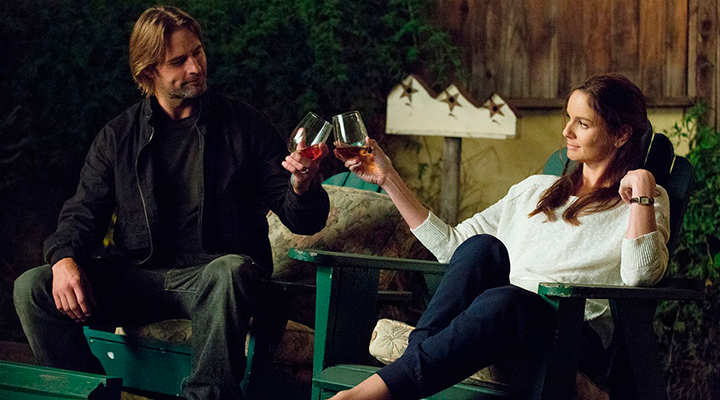 eCartelera: During these first episodes we see you in a role as a double agent, a kind of Jennifer Garner in the series ‘Alias’. It was an interpretive challenge to have this double identity, to have those two sides of the same coin.

SWC: Good reference. The truth is that I played the role as if Katie were an actress. Ultimately, the job of an actor is to be a kind of double agent, we try to play characters without showing that we are lying. I found it very funny about the character, the scenes in which I seem to hide something seem very interesting to me.

Another aspect that I really liked about Katie is that she uses different tools for warfare. To be revolutionary you don’t have to go with boots, weapons, shooting people left and right, but you can manipulate yourself to bring certain situations to a more manageable terrain.

eCartelera: In the series, in the third season, which is the one you have just prepared, we are going to see you as the director in one of the episodes. What did you experience? Currently there are not so many female directors in cinema and series, and we will also see you as a scriptwriter in a project of yours.

SWC: Yes! I have written two scripts, we are looking for funding to carry them out, I hope they see the light soon. And about the direction of the episode, it was a very exciting experience, both personally and professionally. I have known Josh for 10 years, and he is an executive producer of the series, and the first thing I did was go to him to raise the hypothetical possibility of directing an episode in the series, to see what he said. If he refused, there was nothing more to talk about, as he is the male lead and one of the producers.

But no, she told me that she was 100% with me on this, and so I began my preparation as a director. And it turns out that the episode that I was offered to direct is one of the most complex episodes for Josh interpretively, so it was very gratifying to be able to help him and be there to support him in the most difficult scenes. It made me see the power we have if men and women come together. Right now there is a lot of talk about the division and how much it is harming women in Hollywood and in many work areas, and this has taught me how powerful we are together.

Many Thanks To The following Website For This Valuable Content.
Sarah Wayne Callies (‘Colony’): “Katie has a universe that does not depend on a male character”