Another new face. The SGE brings Hauge for the today unhappy Lindstrøm. 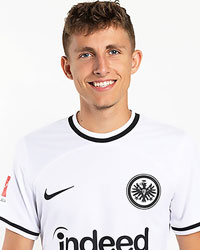 Then the Belgians change. Fischer covers his bleeding eye with a handkerchief. Eggestein comes for him. 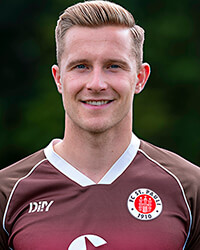 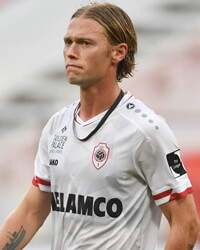 It continues hectically. Fischer loses the ball against Tuta and gets his opponent’s hand in the face. Immediately it starts to bleed under the eye.

Antwerp hits – but the booth doesn’t count! Fischer leverages a free kick from the left half-field to the second six-yard corner. There De Laet breaks away from Lammers and overcomes traps from a short distance. After review by the VAR, referee Tierney decides on offside. Fact: De Laet was delicately offside with his right shoulder. It doesn’t get much closer!

While things continue for Verstraete, who is probably a little more uncomfortable, the same as with Butez, the home side change. Borré is replaced by Lammers. 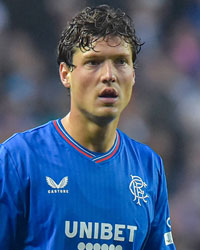 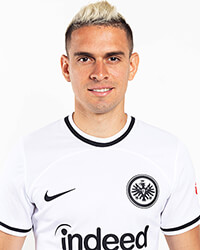 What a strange scene: after a Chandler flank, Verstraete steered the ball out of its own box. At the same time, a firecracker that flew from the Frankfurt block explodes. Both Verstraete and keeper Butez, who was standing right next to them, keep their ears. Obviously the bang hit them.

Antwerp changes for the first time in this encounter. Dwomoh goes, Yusuf comes. 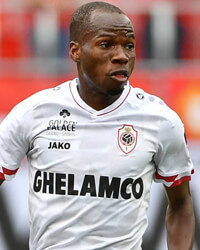 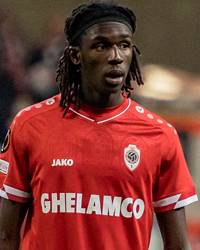 Samatta appears on the right wing. Trapp’s flat cross artistically destroys with a defensive foot. On the other hand, Kostić hammered the leather over it from half-left from 21 meters.

Kamada sticks out of the center to Borré half left. The 26-year-old fails free-standing against Butez, but was sidelined anyway.

Pyros are ignited in the home corner. Referee Tierney from England sees no reason to stop the game. Nevertheless, there are now thick billows of smoke on Trapp’s half of the game.

From the right, Chandler pulls into the middle and tries a left-footed shot from 18 meters into the near corner. Butez will parry safely. 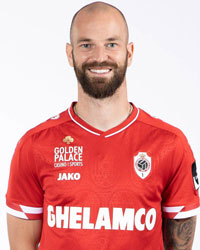 What the Frankfurters still lack is the punch in the last third. In the switching moments it always looks quite pleasant. In the end, however, there is often a lack of the final pass.

There was a lot more in it: With a fine flat pass, Borré is sent to the right to the baseline. Instead of looking for the direct route to the gate, he waits for Kamada to come along. However, the pass in the direction of the 25-year-old is blocked by the red-whites to the corner, which does not bring anything.

… Kostić explains briefly to Lindstrøm, whose attempt from the half-left edge of the box only dies in the turmoil.

The SGE countered on the left via Kamada. His flank is anything but dangerous, but he still pulls out a corner …

It seems like the guests emerged from the cabin with more determination. You currently have significantly more possession of the ball in the last third than over long stretches of the first section.

It continues without personnel changes.

Half-time conclusion:
Break in Hessen, between Eintracht Frankfurt and Royal Antwerp the score is 1: 1. For the entire 45 minutes, the eagles actually have the story under control. The leadership of the home side by Kamada was accordingly well deserved. Even after that, the Belgians couldn’t get a foot in the door. After a little over half an hour, they compensated with a deflected Nainggolan shot. Since then, the Bundesliga team has taken on more initiative and has good opportunities. But the reward is still missing. So, at least in terms of results, it remains exciting for the time being. See you soon!

… and again it burns! From the penalty spot, the home side fail because of the shaky defense of the bottom of the group. Then Sow takes out the third corner kick in a row. Butez wants to intercept this, but lets it bounce on the head and then out. Then it’s halftime.

Danger! Borré maneuvers the ball after a cross from the right at the near post in the direction of the goal. The guests clarify but to the corner. This leads to another …

Time and again, unity breaks through the wings. However, the crosses rarely endanger the Antwerp defense.

Good opportunity for the Hessians! Kamada finds with his flat flank from the left at the penalty spot Lindstrøm. The 21-year-old chases the thing over it.

How does the Glasner troop react to this unnecessary setback? First of all, she is pushing the new leadership with great speed. But nothing that can be counted still comes out of it.

The opposite side: After a flat Kostić cross, Nainggolan does not get the pill cleared from the penalty area. Kamada gets stuck with his shot, in the second attempt Jakić slams the thing over it from a half-right position with a dropkick. 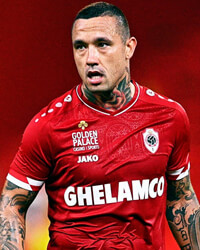 The Belgians equalize out of nowhere! A corner struck up lands on the edge of the sixteen at Nainggolan. The 33-year-old pulls off volley in Lothar-Matthäus-style and benefits from N’Dicka. On the fiver, the defender falsified unsustainable for Trapp.

After more than half an hour, the leadership for the Bundesliga club is absolutely fine. He has everything under control, especially defensively, without being brilliant offensive. There, however, Royal has not yet taken place at all.

On the right in the penalty area, Lindstrøm takes a hook against de Laet. His left-footed shot rushes a long way off to the left.

That wasn’t really bad. A corner of Eintracht from the left lands on the second post at Kamada. Borré reached the flank of the Japanese, but his head rest didn’t find a taker. In addition, the newcomer was sidelined.

Chandler gives in from right, where Kamada gets stuck with his attempt. In the pursuit Kostić scored a field goal from 22 meters from the left.

Otherwise, the action has become quieter here. The hosts put their opponents in a little position. However, they do not go to work at the very last risk.

The 1-0 was not really indicated in this phase. The Adler were and are clearly the better team. To date, however, they have not created any real opportunities.

Trapp has to do it! As a result of a corner of the guests, the goalkeeper initially wanders through the six-yard area. First Dessoleil, then Frei, pull out of the turmoil as a group. Against the shot from the latter, Trapp remains the winner. 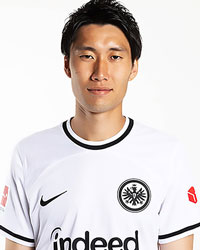 Eintracht takes the lead! Chandler gets the marble on the right wing and crosses directly with a lot of cut to the six-yard area. Kamada stands fairly free in the center in front of Butez and ends with the right outer instep. The goalkeeper is still there, but no longer prevents the impact.

The mood is – as we know it – really good. The SGE fans loudly whip their troops forward. A unique atmosphere, especially in times of Corona.

Sow sticks out of the right half space towards the baseline. Borré takes the ball, but is clearly offside.

On the other hand, the starting position is also clear. With just one point, the Belgians are in last place in the ranking. Four points behind third-placed Fenerbahce mean that two wins are essential to make it into the Conference League. However, the last game in the Belgian Jupiler Pro League didn’t really have any courage: Due to the defeat at Sint-Triudense VV (1: 2), the mood may have suffered a bit recently.

The trend among residents of Mainstadt is upwards. The last four competitive games were not lost, and the last three were even victorious. Among other things, they won the Europa League against pursuers Olympiacos Piraeus (2-1), increasing their lead to four points. Means: A three-point today is enough to move into the next round as first in the table.

The guests are making four changes compared to last Sunday. Instead of Seck, Engels, Yussuf and Manuel, Dessoleil, Almeida, Dwomoh and Fischer begin.

Let’s first look at the line-ups of both teams. Compared to the Bundesliga weekend (2-0 at SC Freiburg), the home side have made no changes. According to the motto “Never change a winning team”, coach Oliver sends the same starting XI that was able to justify his trust in the end.

Hello and welcome to the fifth matchday in the Europa League! For Eintracht Frankfurt, Group D is about nothing less than group victory. Opponent: bottom of the league Royal Antwerp FC. Kick-off in the Commerzbank-Arena is at 9:00 p.m.