Since its attractiveness —and controversial, not to change— was announced about a year ago, we had no news of ‘Resident Evil: Welcome to Raccoon City’; the film reboot of the popular Capcom video game franchise that began in 1996 under the command of Shinji Mikami. Today, we have finally been able to take a First glance to the feature film by Johannes Roberts, and I have to admit that the hype has shot up unexpectedly.

Thanks to IGN, we finally got to see Kaya Scodelario and Avan Jogia as Claire Redfield and Leon S. Kennedy, dressed in their characteristic costumes from ‘Resident Evil 2’. But this is not all, since we have also visited the hall of the Spencer mansion – recreated with all the essence of the original – to see Hannah John-Kamen’s Jill Valentine and Robbie Amell’s Chris Redfield uniformed and sporting the STARS emblem

Although probably the big surprise has come through the shocking image of Lisa Trevor, the adolescent daughter of the architect responsible for the Spencer mansion, condemned to wander the winding corridors of the building turned into a monster after suffering horrendous experiments with different viruses on her flesh. The truth is that they have captured quite well that essence that so many bad times gave us in the 2002 remake.

Beyond the visual advances, if something has made this contact with ‘Welcome to Raccoon City’ interesting, it has been the statements of its director, in which has spoken about the tone and atmosphere that we can expect from her, making it clear that it will not be anything like the saga starring Milla Jovovich.

“This movie has nothing to do with the previous franchise. This has been focused on going back to the games and creating a horror movie, rather than the sci-fi action sort of the previous ones. Above all, it influenced me a lot. the remake of the second game, and I wanted to capture that atmospheric tone that it has. It was very cinematic. The previous films were very bright and bright, while this one is dark and dirty, shot entirely at night. It is constantly raining and the city is enveloped by the fog…” 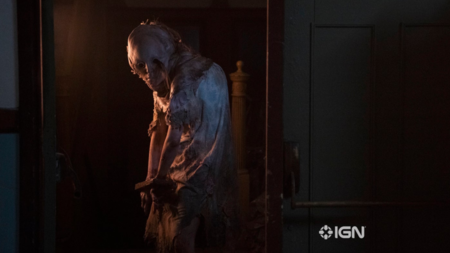 But beware, because the bomb has come from the hand of a list of references that is not wasted, and that will put the long teeth to a good part of the fans of genre cinema.

“I was very influenced by movies like ‘The Exorcist’ (And The Exorcist 3 ‘!),’ Shadow Menace ‘and’ The Shining ‘. You can feel the texture in this movie. There is nothing in the city that seems to be high tech. Everything seems to be in shambles. I wanted Raccoon City to feel a bit like the city from ‘The Hunter’; a ghost town forgotten by the rest of the world. And the whole structure of the movie was definitely heavily influenced by ‘Assault to the 13th district police station. “

Carpenter, Friedkin, Kubrick, Cimino and Roeg as sources of inspiration for a ‘Resident Evil’ movie in which Capcom has also participated directly? I don’t know about you, but I’m already looking forward to the premiere of ‘Welcome to Raccoon City’, set for next December 30, 2021 in Spanish lands. Before hitting our theaters, it will pass through those in the United States on November 24, and those in the United Kingdom on December 3.

Many Thanks To The following Website For This Valuable Content.
Welcome to Raccoon City ‘shows its first images and its director reveals a list of mind-blowing influences, including Carpenter and Friedkin